2018 has just begun. What will a new year bring for the gold market?

The current economic expansion is surprisingly durable, as it has already lasted more than 100 months. It worries many investors who are afraid of the upcoming recessions. Surely, there are many reasons to worry, and the recession will eventually come. But we are not at this point yet. The current expansion is unusually long, but it is exceptionally sluggish. This year we expect that the global economic growth will continue. Actually, it may even accelerate and become more synchronized among countries. Moreover, with relatively strong business momentum, the labor markets in advanced economies should strengthen further. And although inflation is likely to rise, it will remain low. Hence, the macroeconomic outlook will remain unpleasant for the gold market, as the yellow metal prefers periods of economic turmoil or stagnation.

Fed Will Be Gold’s Enemy

The Fed will continue its gradual tightening. In 2017, the U.S. central bank lifted interest rates three times. We expect similar number of hikes this year. The unwind of the Fed’s enormous balance sheet would withdraw some liquidity from the market, exerting an additional tightening effect for the financial conditions. Moreover, Jerome Powell will replace Janet Yellen as the Fed’s Chair. And we will also see a few other significant personal changes at the U.S. central bank. We predict, thus, that the FOMC will be more hawkish in 2018 than in 2017. The Committee will include more hawks (due to the normal rotation among the regional Fed Presidents, Trump’s nomination to the Board of Governors), but also all the members could vote in a more hawkish way, given the strong economic momentum. A lot will depend on inflationary dynamics, but we believe that a modest hawkish shift is likely this year. Gold reacts more to the real interest rates, not to the federal funds rate, but the Fed’s hawkish rhetoric should be a headwind for the yellow metal.

U.S. Dollar Will be Key to Gold’s Future

As we explained last week, the gold performed well in 2017 despite an unpleasant macroeconomic environment and the Fed’s interest rate hikes because of a greenback’s depreciation. The price of gold is closely tied to the fate of the U.S. dollar not only because bullion is prices in greenback, but mainly because gold is considered to be the bet against the U.S. dollar. It is the ultimate safe-haven, purchased as a hedge against the collapse of the greenback. In 2017, the U.S. dollar fell about 15 percent against the euro, as one can see in the chart below. 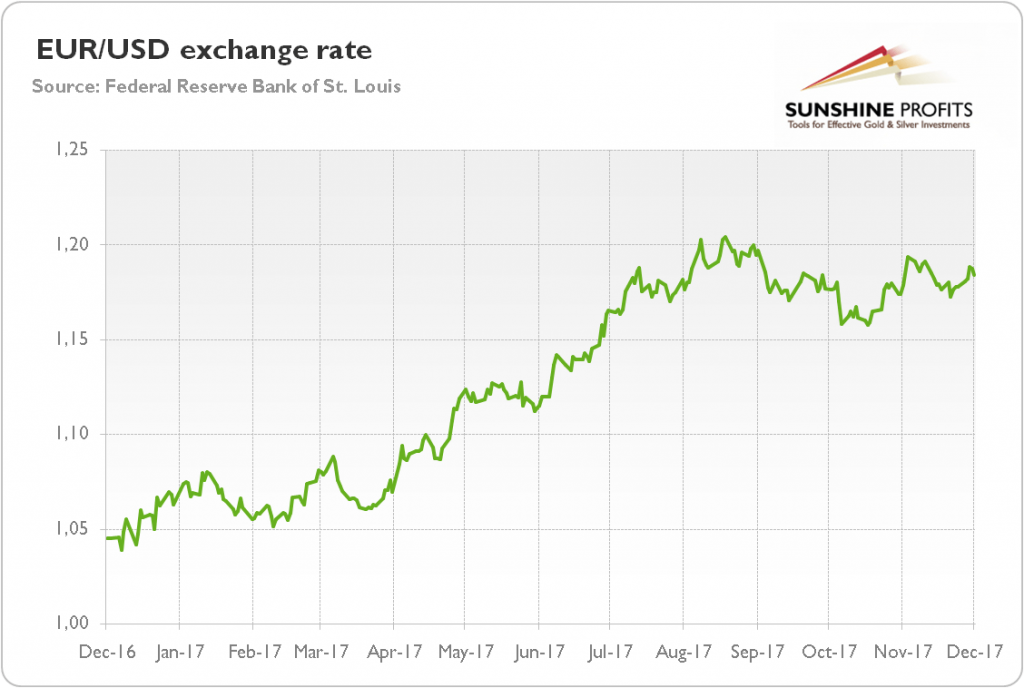 On the one hand, the depreciation could continue this year. There are three reasons for that: first, the strong economic momentum in the Eurozone; second, the expectations that the ECB will tighten its monetary policy in the near future; and, third, the investors’ distrust in positive long-term effects of Trump’s economic policies. The tax cuts, increased government spending, and economic nationalism may provide some stimulus in the short-term, but at the expense of higher fiscal deficits and with no effect on the labor productivity.

On the other hand, there are also some arguments that the greenback will rebound this year. First of all, the Fed will hike its interest rates even further. Higher interest rates should make U.S. dollar-denominated assets more attractive than their foreign peers. We know that the Fed’s hikes have not strengthened the greenback so far, but investors should remember that during the previous Fed’s tightening cycle the USD didn’t rally until the 4th rate hike. If history repeats, the greenback may catch its breath, which will be negative for the gold market.

To conclude, our fundamental gold outlook for 2018 is rather bearish than bullish, although the fact that the business cycle is more advanced in the U.S. than in the Eurozone could be an important tailwind for the yellow metal. And if black swans arrive this year, the gold prices will be additionally supported. Last but not least, a lot depends on the market sentiment. In 2016 and 2017, the shiny metal rallied in January and February. In 2018, gold has already jumped above $1,300, so there might be a replay from previous years, although later in the year gold may struggle. Anyway, the persistence of low volatility in the gold market for another year is rather unlikely. Stay tuned and be prepared for the investment opportunities in the gold market in 2018!

Arkadiusz Sieroń is a certified Investment Adviser. He is a long-time precious metals market enthusiast, currently a Ph.D. candidate, dissertation on the redistributive effects of monetary inflation (Cantillon effects). Arkadiusz is a free market advocate who believes in the power of peaceful and voluntary cooperation of people. He is an economist and board member at the Polish Mises Institute think tank. He is also a Laureate of the 6th International Vernon Smith Prize. Arkadiusz is the author of the Market Overview reports and Gold News Monitor for Sunshine Profits.