Almost a year has passed since the US presidential election, but the continuing message of hate and racism by the far-left media is starting to take its toll. Ordinary people are beginning to mentally crack and act out. The typically passive millennial that occupies the moderate left is quickly becoming more radicalized. No longer satisfied with virtue signaling hashtags on social media, this group has taken to the streets and is committing acts of vandalism and violence. The perpetrators are overwhelmingly upper-middle-class “activists” who have spent the majority of their entitled lives secluded from accountability for their actions. For proof, you need not look any further than the pasty pale-skinned youth that currently make up a majority of ANTIFA protests.

I loathe social media, but my wife keeps me up to date on the general feelings and attitudes of the masses during her nightly session on Facebook. She tells me personal attacks on individuals with opposing political positions are the worst she has ever seen. The divisive nature of modern politics is causing family and friends to turn on one another at unprecedented rates.

Here is one example that hit close to home: 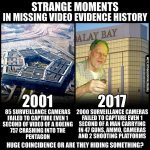 A meme titled “Strange Moments in Missing Video Evidence History” has become very popular and is currently making its way around the internet. The photo compares the absence of any video that clearly shows a plane hitting the Pentagon during the 9/11 attack, and the yet to be seen hotel surveillance video of the Las Vegas shooter. My wife posted this meme on her Facebook page without comment.

Within minutes of my wife posting this picture, the millennial-aged son of a family friend responded with a vengeance. Rather than engaging in an adult conversation that consisted of facts and evidence to support his differing opinions, he responded with a rambling diatribe full of derision and scorn. He made it very clear that he has no use for people who are capable of critical thought or those that question the “official” story. After calling my wife “stupid and ignorant” he concluded his childish rant by accusing her of disparaging first responders who lost their lives on 9/11. Keep in mind that this was not a random internet troll hiding his hatred behind an anonymous online account. This person was practically a member of the family and his response was totally out of character.

It was not only his sudden “triggered” response that concerned me, but how common his profile is among the 74 million 18-34-year-olds that are known as millennials. After losing his father to cancer at a young age, this young man was raised in an affluent neighborhood to a loving but overprotective mother. As an only child, he never had to share or compromise with others his own age. The fear of rejection by strangers and the opposite sex made his high school years ones of extreme awkwardness and solitude. His pretentious behavior toward peers in college was reinforced by a mother who constantly showered him with praise no matter if right or wrong in his actions and decisions. Now in his late twenties, he is a fervent supporter of former President Obama and supported Hillary Clinton in her failed bid for the presidency. His online attack upon my wife, most likely not his only target, was done without empathy or thought of friendship. I’m sure he viewed her as weak and unwilling to respond. Those are the actions of a sociopath in training.

What makes the newly radicalized left so dangerous? They are cowards and cowards are highly unpredictable. The masked attackers of ANTIFA smashing the heads of unarmed counter-protestors with bike locks are the embodiment of cowardice. The far-left politicians have used social media to create millions of these weaponized minions, and they are being unleashed upon an unsuspecting populace who mistake them for harmless iPhone zombies.

It is my belief that these sheltered, self-absorbed, and disenfranchised young “adults” will only become more violent as their dream of a Marxist utopia in the United States of America falls deeper into the dustbin of history. As prepared individuals, we need to be aware of this new potential threat if things get ugly. There is nothing more dangerous than a wounded and cornered animal. Even if that animal is wearing a beanie and skinny jeans.