I remember as a young man I spent a considerable amount of time hiking, backpacking, and camping in the mountains, usually by myself. Getting away from it all and honing my skills of self-reliance at the same time has always appealed to me. Maybe it is something, on a primal level, relating back to my cave man ancestry.

It has been my experience that anytime you are completely alone that your awareness and senses go into overdrive, bombarding you with all sorts of new stimuli. At times, this can become overwhelming, and I would be lying if I stated that I have never had the hair on the back of my neck stand up when I was deep in the woods all by myself.

Once Upon A Time

Once upon a time when I believe I was 17, I had parked my truck at the base of the Powder Horn Primitive area outside of Gunnison, Colorado. On paper it appeared to be about a nine mile hike, and I got out of my Ford Ranger and began walking. About two hours into it, I had only made about 2.5 miles and was already experiencing leg cramps, which was not a very good omen. My plan was to make it all the way to the highest of three mountain lakes and then camp and fish for a few days.

Another couple of hours and I was about six miles into my nine-mile hike and completely exhausted. My pack was a heavy 80 plus pounds, and I was feeling every single ounce of it. I had also picked up a tail at some point and I had no idea whether it was friendly or not. I kind of assumed it was likely a dog someone had abandoned or that had run off and got lost, but whatever it was it moved when I moved and stopped when I stopped.

Yes, it was unnerving to say the least. Finally, at around 1800 hours, I made it to the third mountain lake, totally spent. I chose not to pitch my tent, since I was completely exhausted. So, I stretched a tarp between a couple of trees and built a quick fire. With a couple of canteens full of mountain spring water and a full belly of Top Ramen (yuck) I was lying/dozing off when I heard the crack of a branch being stepped on in the black woods behind me.

I told myself that it was likely an elk or deer walking through and stepping on a branch. At least, that was the happy version. That was one of the longest nights of my entire life, wondering what was out there in the darkness circling my camp. I honestly think I was being stalked by something, whether wild dogs, wolves, a mountain lion, who knows for sure. I never did get a clear look at anything, but I heard numerous low guttural snarls and growls all night long.

It is amazing how the night swallows up your flashlight beam, and that night I had a 3D cell mag lite with me that didn’t shine very far into the deep shadows of that moonless night. I wasn’t completely helpless in the face of whatever was out there. I did have my fixed blade Kabar Marine combat knife and my 1911 .45 acp. The 1911 was loved dearly, but I wouldn’t have actually wanted to shoot a charging bear with it, as it has way too many sharp edges on it in case the bear took it away from me and shoved it somewhere tender, lol!

Need For A Night Vision Scope

What I really needed that night was a night vision scope. Then I could have seen what danger was lurking there in the darkness.

US Night vision devices have been around since the end of World War II with the advent of the American Military’s first active infrared night vision scope. This first unit utilized a huge dish shaped infrared light transmitter that beamed invisible light out into the darkness that the scope could pick up, thus illuminating whatever you were looking at. Range on these earliest devices was only about 150 yards, but they did in fact work. The battery life wasn’t very long at approximately 40 minutes for continuous use, but they would give you a sizable tactical advantage over anyone who didn’t have one of these scopes. This infrared beam was invisible to the naked eye, making it a great tactical advantage in combat.

The German Military beat us to the punch by a full six years, developing their own active infrared night vision scope as early as 1939 with a range of approximately 600 meters by 1943. One of the huge challenges of these systems were the huge battery packs that were required to power the units, making them difficult to use.

These systems use an anode in conjunction with the cathode to accelerate the electrons. Another problem with that approach was that the acceleration of the electrons distorts the image and greatly decreases the life of the tube. Furthermore this technology in its original military use was quickly duplicated by hostile nations, which allowed enemy soldiers to use their own NVDs to see the infrared beam projected by the device. Sometimes you will hear active infrared systems referred to as Generation 0 night vision.

The next generation of NVDs moved away from active infrared, using passive infrared instead. Once dubbed Starlight by the U.S. Army, these NVDs use ambient light provided by the moon and stars to augment the normal amounts of reflected infrared in the environment. This means that they did not require a source of projected infrared light. This also means that they did not work very well on cloudy or moonless nights. Generation-1 NVDs use the same image-intensifier tube technology as Generation 0, with both cathode and anode, so image distortion and short tube life are still a problem.

Gen 1 NVDs are pretty inexpensive these days, and readers are forewarned that a lot of Russian import NVDs that claim to be Gen 2 and Gen 3 tubes are really only U.S. Gen 1 tube spec. Another problem with Gen 1 NVDs is that they are extremely susceptible to damage from unexpected bright lights, such as a searchlight or even car headlights, if they are directly into the unit. Even if they aren’t damaged by sudden bright lights, they bloom pretty bad from excess bright light. Range of these units are usually 75 to 100 yards, and tube life is only around 1,500 hours.

Affordability sums up Gen 1 NVDs. It gets you some night time capability, and obviously some night vision is always better than no night vision. Is it the latest and greatest? No, in fact, Generation 1 technology dates back to the early 1960’s. That’s when a computer was the size of a small house and 20 plus years before cell phones were even invented. Examples: AN/PVS-2 Starlight scope and PNV-57A Tanker goggles. Gen 1 is hard for me to recommend that anyone actually purchase one of these to defend your life and homestead with, but they are better than having early night vision equipment, lol. 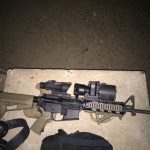 Since the MCP actually increases the number of electrons, instead of just accelerating the original ones, the images are significantly less distorted and brighter than earlier-generation NVDs. Gen 2 tubes last considerably longer than Gen 1 tubes and are generally more durable. Tube life of Gen 2 tubes last over three times as long as Gen 1, or around 5,000 hours. More expensive than Gen 1, the performance is noticeably better and well worth the extra capital required. I would recommend first time NVD purchasers check out Gen 2 and Gen 2+ units as a starting point.

Gen 2+ devices are better units than the earlier Gen 2 units. Enhanced performance and the ability to provide increased recognition ranges in lower levels of light are what you are purchasing over Gen 2. Pretty much everyone sells them these days, and U.S. devices will contain tubes made by ITT, Litton etc… Check Cabela’s, Bass Pro, and Sportsman’s guide for these entry level units. Examples: AN/PVS-4, AN/PVS-5, SUPERGEN, PNV-57E.

Generation 3 is currently used by the U.S. military. While there are no substantial changes in the underlying technology from Generation 2, these NVDs have even better resolution and sensitivity. This is because the photo cathode is made using gallium arsenide, which is very efficient at converting photons to electrons. Additionally, the MCP is coated with an ion barrier, which dramatically increases the life of the tube, up to 10,000 plus hours for some tubes. One of the key specs to look for is the line pair per millimeter rating of the NVD. The higher quality units will have 64 lp/mm or greater. This rating is generally indicative of the quality of the tube you are getting. However, lp/mm is only one of three important specifications you will want to check into. Examples: AN/PVS-7, AN/NVS-7, AN/PVS-10, AN/PVS-14, AN/PNVS-14, CNVS-4949, and PN-21K

This is a tricky one, as technically there is not really a Gen 4 classification, according to the U.S. Army. When it was initially introduced the U.S. Army recognized the Gen 4 technology classification. However, after testing reliability and life span of the Gen 4, the Army determined that this technology did not meet their strict requirements and thus recanted the Gen 4 definition. So what does this mean for someone looking for the best equipment they can get? In terms of performance, Generation 4 equipment is only marginally equivalent to or slightly better than most Gen 3 autogated NVDs.

However, the very nature of the 4th Generation technology makes it more prone to failures and reduces its life expectancy as compared to quality Gen 3 equipment. Pinnacle tube Gen 3 autogated models offer the NVD user spectacular performance, much better tube longevity, increased reliability, and a lower investment cost. Although some people feel that Gen 4 gives a little better image, it is really a bit of a toss up, and it often comes down to which unit has the better individual image tube. Gen 4 tubes simply do not deliver, and even if you can find an authentic Gen 4 NVD, I do not recommend purchasing. The questionable increase in performance is more than off-set by all the negative aspects of a thin or completely removed ion barrier. Examples: Gen 3 pinnacle auto gated tube AN/PVS-22, NVS-22

This has been part one of a two part entry for Round 73 of the SurvivalBlog non-fiction writing contest. The nearly $11,000 worth of prizes for this round include:

Round 73 ends on November 30th, so get busy writing and e-mail us your entry. Remember that there is a 1,500-word minimum, and that articles on practical “how to” skills for survival have an advantage in the judging.