Here are a few reasons why gold should be accumulated at these levels:

Although gold rose significantly from 2001 to 2011, it was not really the ideal conditions. There were many reasons for conditions not being ideal, such as: rising stock markets and major commodities like oil (more markets rising means more competition for investment).

In fact, these falling interest rates were in some way facilitating significant rises in the stock market and oil for example, which are investment classes competing with gold.

Below, is a chart that compares gold prices to interest rates: 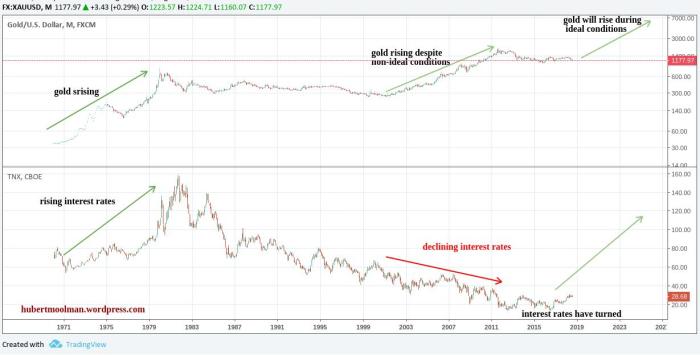 With the coming rising interest rates, gold will rise much more and much faster than it did during the 2001 to 2011 bull market phase. It will rise until interest rates are at relatively high values, so that debt is valued very low.

2. The relationship between gold and the South African Rand/US Dollar (USD/ZAR) exchange rate

This is more of a technical reason. Below, is a long-term USD/ZAR chart: 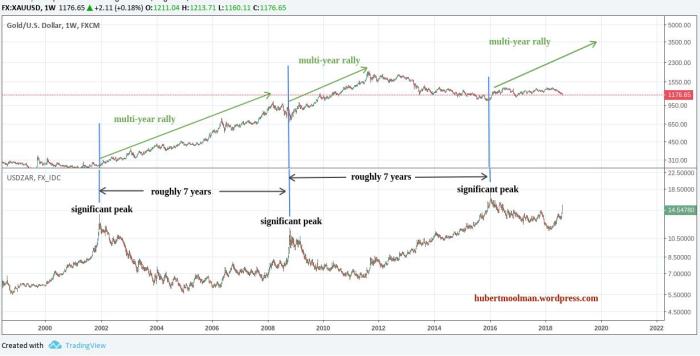 I have highlighted three significant peaks of the USD/ZAR chart. These were formed roughly seven years apart. This ratio tends to spike significantly before major market events or turnarounds.

After each of the first two significant peaks (2001 and 2008), a multi-year gold rally followed. Currently, gold prices hare higher than the level it was at the last USD/ZAR peak, but it has not really taken of yet. The probability that it will accelerate higher over the coming months and years are really high.

Furthermore, it appears that another spike is currently forming on the USD/ZAR chart. This indicates that we will likely have a gold rally in the short-term. It also is possibly signaling a change in acceleration of gold rising, as measured from the last USD/ZAR spike (of January 2016).

For more on this and this kind of fractal analysis, you are welcome to subscribe to my premium service.

This post first appeared on Hubert Moolman on Silver and Gold