There have been only two wars truly fought on American soil– the Civil War and the American Revolution. Both wars were preceded by strong internal conflict– the Abolitionists vs. State Sovereignty in the Civil War, and the Patriots vs. the Loyalists in the Revolutionary War.

The answer, I believe, lies in a series of historical patterns outlined that may be crucial in predicting whether our current political divide will lead to our third great war.

The first historical pattern was brilliantly laid out by William Strauss and Neil Howe in their book, The Fourth Turning. The core idea is that our nation’s major events happen within a 100-year cycle that generally repeats itself. The cycle has four “seasons”, each lasting roughly 25 years, which is the length of a generation. These include:

“The High” is a period of national unity, patriotism, and progress. Many reading this might recall the most recent High, which was post-WWII when the country came together to celebrate the end of the war. It was a time of great energy and enthusiasm. There was a sense of optimism about the future, advances in technology, prosperity, and a collective purpose for the country.

The High acts as a clean up or reset following a crisis and sets the stage for an awakening. Since the High generations place great value on authority, government, and technology, their children are poised to rebel against those very values.

Our most recent “Awakening” happened in the mid-60’s and grew until the late 70’s. The 60’s and 70’s were a generation that rebelled against the notions of war, conformity, and moral standards.

This generation no longer found value in their local community or national patriotism but rather looked inwardly as their source of purpose. The hippie movement promised spirituality through self. Drugs and music were pathways to internal harmony.

The sexual revolution and feminism sought to break that generation free of the moral bonds their parents placed on them. However, as the boomer generation aged, the irresponsibility and self-centeredness took a toll on their children, who responded accordingly.

From the mid-80’s to the 2000’s, civic attitudes had transformed into the opposite of what they had been in the High. An attitude of abundance replaced the old sense of scarcity. Trust in authority diminished, and trust in self increased. There was a war for the culture of America with tribalism along ideological lines taking firm shape.

Americans turned cynical. The nation was becoming fragmented on issues like race, sexuality, religion, and politics. Television and video games were raising children. Crack cocaine was becoming an epidemic, and legalized gambling was on the rise. The decades in this area are marked by risk taking, bad manners and a sobering social attitude.

As the “Unraveling” winds down, Americans will get fed up with the YOLO (You Only Live Once) recklessness and risk taking of the past few decades. The mood will turn pessimistic. The celebrity idolization will feel hollow. The mood of spirituality will darken, and a feeling of decay and despair will be prevalent.

People are looking for a big change to occur. We are primed for the fourth turning.

Every Crisis period begins with a catalyst, a spark that catches fire, an event or series of events that creates a sudden shift in mood. In the American Revolution it was the Boston Tea Party. For the Civil War it was the election of Abraham Lincoln and the Union debacle at Bull Run. With the Great Depression it was Black Tuesday.

It doesn’t really matter what the spark is; what matters is that this time it produces a flame. The core elements (economic pressure, social divisiveness, international frustrations) will become interconnected by a single event, which will cause an outburst by one group and an escalated response by the opposing.

Fear will take root. Fear that the government cannot sustain the entitlements many rely on. Fear that jobs cannot be retained and debts will not be repaid. Fear that America’s weaknesses are now exposed to foreign dangers. This fear will move America to isolation, which will manifest itself in imitation and aggression, transitioning itself from a post-war posture into a pre-war era.

The Cycle Repeated in Europe and America

This cycle of High, Awakening, Unraveling, and Crisis has repeated every 70-100 years in Europe and America since the 1400s. Consider how consistent the time periods between crisis have been:

An average of 92 years pass between each crisis event. If we added 92 years to the last crisis event– the Great Depression in 1929– we would get the year 2021.

That average of 92 years between each crisis event to 2021 is a strong data point in itself but becomes even more interesting when you overlay this pattern over top the lifespan of a world empire outlined by the brilliant Sir John Glubb in his renowned essay, The Fate of Empires.

The Fate of Empires is a deep dive into the life cycle of every world Super Power, 11 in total, in Europe and the Middle East going back to the Assyrian empire in 859 B.C. He discovered that all 11 empires are quite consistent in both their life stages as well as their duration. 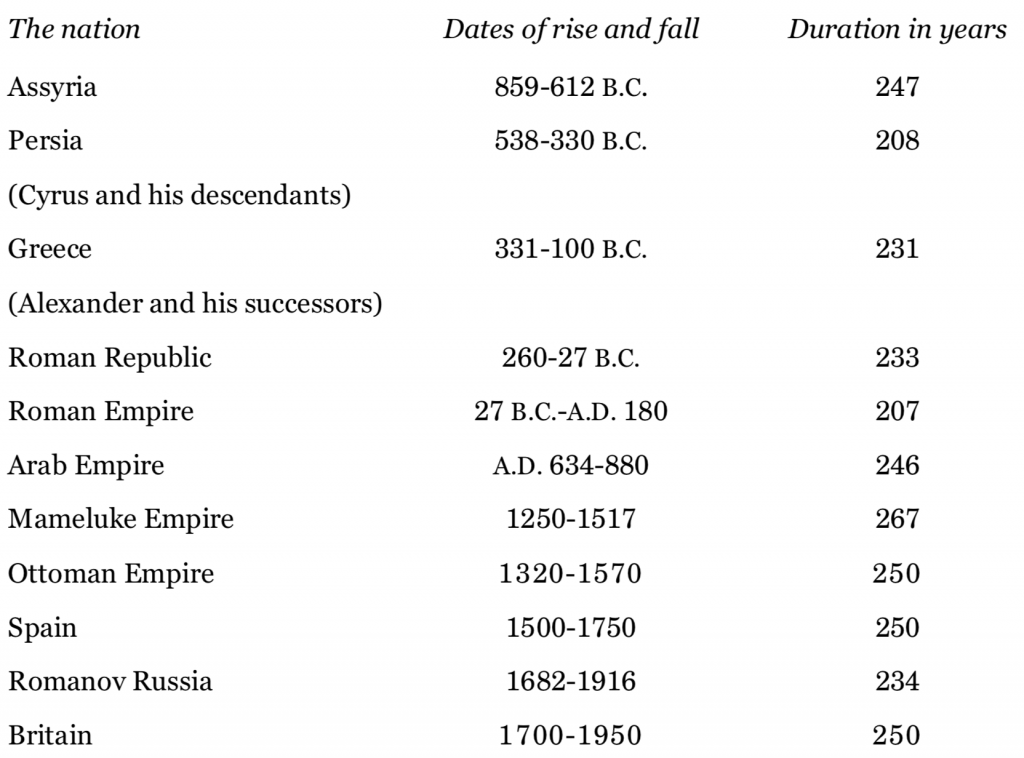 Only one world super power has lasted more than 250 years with the average duration of 238 years. If we use 1776 as the starting point for America, after 238 years we expect the fall to be in 2014. However, as we’ll look at shortly, 2014 falls squarely in the middle of an Unravel generation in which the national attitude isn’t quite primed for a crisis.

As we are now in 2019, we’ve already surpassed the average duration of a Super Power, and we’re quickly headed toward the upper limit of 250 years, which will take place in 2026. The year 2026 also marks the end of the Unraveling era.

Let’s look at Glubb’s six life stages to see where America falls in its life cycle as an empire.

While each one of these ages is worth exploring, the last stage– decadence– is most important, as that is the stage American is in currently.

The Stage of Decadence

The Stage of Decadence is marked by:

The Stage of Decadence is due to:

When Will America Begin Self-Destructing

I think we can all agree that America today suffers from all of the symptoms of Decadence and is poised to follow in the footsteps of the 11 great Super Powers that came before her by self-destructing through internal turmoil and conflict as the next super power readies to take its place. So, when will it happen?

To help answer this question of when it might happen, we will overlap the four generational turnings with Glubb’s Empire Life Cycle to see if they can agree on a date that will help predict the next and last crisis. 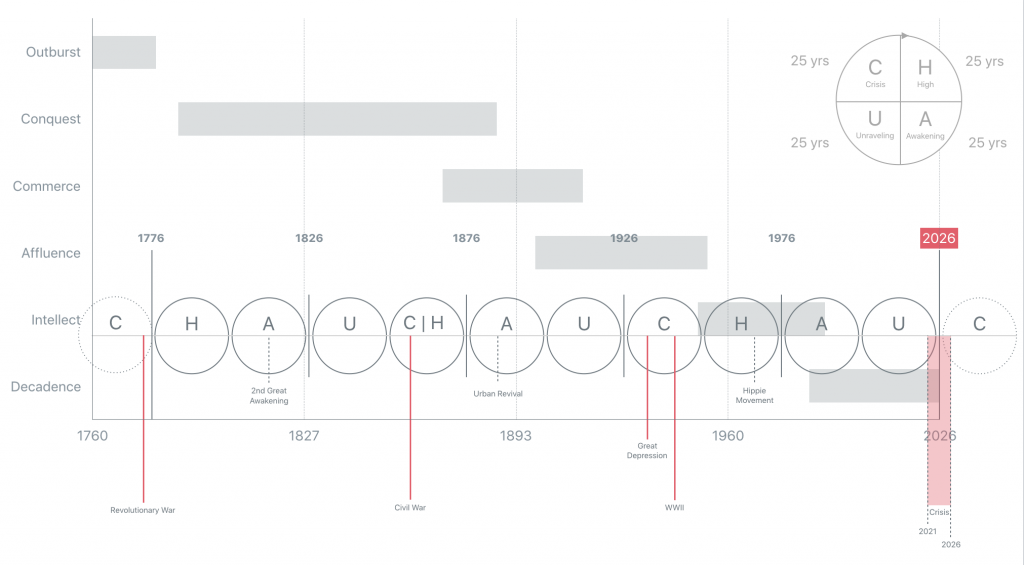 The bar chart on the left side of the graph shows Glubb’s six phases of an empire. Although the dates aren’t hard starts and stops, like represented in the gray bars, it does seem like America’s progress as a world power has followed the 11 before it.

Each of the 10 circles represent a generation, roughly 25 years. The letter in each circle designates what phase of the four turnings that generation is in: “C” for Crisis, “H” for High, “A” for Awakening, and “U” for Unraveling. The only anomaly is the generation between 1850 and 1875 where the Civil War arrived 4-5 years ahead of time and its conclusion nearly a generation early.

Without this lost generation, we could have added another 25 years to America’s lifespan, which would put it at the upper end of the longest reigning super powers. This would have been expected, as advances in medicine and healthcare have extended lifespans and modern families are delaying having kids longer than previous generations. However, with the loss of the Civil War years, we have sped up the timetable on the last crisis event bringing us in line with previous empires.

Results of Our Two Patterns

Our two patterns point to a timeframe between 2021 and 2026 as the time in which we would most expect a spark to ignite the flames of war. Unlike the previous wars where America has risen from the ashes to become a stronger nation, this war will mark the end of America’s Empire, just like the 11 before it.

A Quick Note About Dates And Predictions Based On Historic Trends:

Patterns like the ones we’ve explored today do not “cause” future events to happen; they merely point out the similarities, helping us identify the causes. There is always internal conflict, but those sparks cannot catch fire unless certain environmental factors exist that support a flame. Namely, enough time must pass since the last major conflict for the current generation to no longer remember the pain and cost of the previous crisis.

It is the attitude of the generation that causes war. That attitude is shaped by the events brought about by the previous generation and their attitude toward the events their parents’ generation caused.

We see the same cycle of sin and judgment in the Bible, best shown through the book of Judges. Israel would sin by turning to idolatry (Unraveling). God would judge them through slavery (Crisis). They would cry out to Him for salvation, and He would send a Judge to rescue them from bondage (High). They would turn back to God (Awakening). Soon they would start to worship idols again (Unraveling).

This cycle happened for hundreds of years, with each phase or turning lasting just 20 years. Keeping in mind that in ancient Israel women began bearing children in their teens and life expectancy was much shorter than today, it makes sense that a generation lasted an average of 20 years as opposed to today’s 25 years, resulting in 100-year cycles instead of 80.

It’s easy to judge the spiritual state of today’s generation where homosexual marriage is sanctioned by the state and celebrated by the media. Feminism has an iron grip on today’s youth. Over 60 million unborn children were aborted since Row v. Wade. Then there is the immorality and corruption of our elected representatives in Congress and local leadership.

The Next and Last American Crisis

When we combine the cycle of sin, with the four turnings and finally Glubb’s Fate of Empires timeline, I believe we have a strong case for why 2021–2026 will contain a spark that ignites the next and last American Crisis.

This has been another entry for Round 80 of the SurvivalBlog non-fiction writing contest. The nearly $11,000 worth of prizes for this round include:

Round 80 ends on January 31st, so get busy writing and e-mail us your entry. Remember that there is a 1,500-word minimum, and that articles on practical “how to” skills for survival have an advantage in the judging.