Now, let’s talk a little bit about the night vision technology. Your standard night vision devices, such as the PVS-14, are image intensifiers. This means that they amplify ambient light to produce the familiar green image. (Now, you can get white image versions.) On a lighter night they work better, on a darker night not so good. This is because they magnify the available light. These are passive devices, in that they do not generate anything that can be picked up by an observer. They are equipped with an IR flashlight, which can be used to covertly illuminate a small area.

A thermal imager, or FLIR, uses a different part of the IR spectrum than an image intensifier and detects heat emissions. Therefore, the picture you see is made up of the heat differentials observed. In that sense, a thermal imager is a little bit more magic than an image intensifier and shows you a video image. These devices are great for static observation. With a small handheld FLIR device about the same size as a PVS-14, you are looking at a tiny little video screen. In my opinion, such a device is best used for periodic scanning in a static OP or if out on patrol scanning from a static position over the ground ahead. 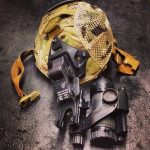