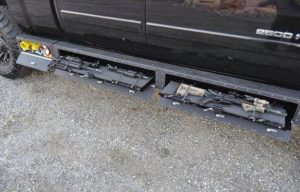 Dear Sir,
Thank you for an excellent web site. I read it every day. I have a question regarding traveling with my handgun. Living in Ohio, a reasonably free state these days, I occasionally have to travel by car to one of the totalitarian states. States such as New York, New Jersey, Illinois, and Maryland. I of course prefer to carry my handgun and have CCW licenses to carry in all the surrounding free states on the way. However, as my need to enter these other states, would potentially land me in jail if I brought my weapon, I must make my whole trip unarmed. Are there gun storage options?

Other than burying my gun just outside the state line of one of these totalitarian regimes, do you or your readers have any suggestions? I have considered contacting gun retailers near, but outside the borders. Perhaps asking them to store my gun while I am in the hostile territories. But this may have many complications, including entry at many points depending on my destination and scheduling.

While many guns shops would be accommodating (for a small fee), keep in mind that you might have to do a background check to get your own gun back! (That could be avoided if there was a fee for “gunsmithing service”, while they held your guns. That could be as simple as just “lubrication.”) For example, I’ve heard of a couple of FFLs in Tok, Alaska (the last city in Alaska before you enter Canada on the Al-Can Highway) that do this for a fee.)

Some alternatives to storage with a gun shop could be public lockers in train stations, bus terminals or in hotel concierge luggage rooms, or perhaps in mini storage company spaces. (But the latter are fairly expensive and there is lot of paperwork.) Another option might be storage with a shooting range facility. Yet another might be companies in tourist towns that rent bicycles or kayaks. (They often store luggage for the customers for a modest fee, or even free with a rental.) But of courses security might be dicey with any of those, so do your due diligence.

One partial mitigation to that risk is using discreet gun cases. My favorite for this is using musical instrument cases. These come in all shapes and sizes, and many of the hard cases are locking. I’ve found that a trumpet case works great for a takedown riotgun. An electric guitar case will fit a lot. Just be sure to slap on a few music-related stickers, for camouflage. Needless to say, you will need to first research company policies and state and local laws…

A side note: I’ve found that public locker accommodations are much more extensive in Europe than they are in the States. In Europe rail travel is much heavier per capita so therefore they’ve developed a much larger infrastructure. In some European train station that have hundreds of lockers! FWIW, I once safely left a sizeable cache of 19mm HK flares, gun magazines, and a few pocketknives in a locker at the Hauptbahnhof in Frankfurt for several weeks while I was touring elsewhere in Europe. Those items were much safer from theft there. My knowledge of the laws of some of the countries that I was going to be visiting was admittedly scant.

A far better alternative to all of the foregoing is developing friendships. Using some networking, you can develop a personal “hospitality database” of trustworthy pro-gun people who live in or near state lines or national border cities. Ideally, this would be with like-minded folks who have some extra gun vault space. The quid pro quo could be just the promise of a place for that family to stay while on vacation. Taking turns at cooperative housesitting, A place to safely park their car (if you live near a major airport or a cruise ship harbor.) Perhaps even the promise of mutual “Plan B” bugout locations, in the event of a disaster. Think outside the box and do some networking. Some of the friendships that you develop could be mutually rewarding in many ways.

You might also want to check this letter out on long term underground storage of firearms.

Perhaps some readers would like to chime in on this.