Please don’t order any copies of my upcoming novel “Survivors: A Novel of the Coming Collapse” until its release day, October 4th, 2011. 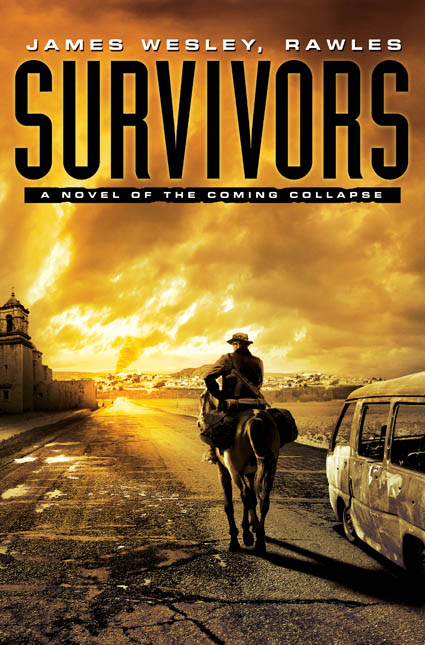 The cover art was masterfully rendered by mixed media artist Tony Mauro, Jr. of New York. He took my vague one-minute verbal concept description, and he nailed it. I am very happy with his design and his choice of color palette. It really captures the essence of the novel. (The lead character, Andy Laine, is depicted on horseback in Texas, in the midst of The Crunch. You’ll see how closely Tony matched the storyline when you read the novel. Much of the novel is set in the Four Corners Region. I don’t want to reveal any spoilers, so I’ll keep this brief.)

“Survivors” is unusual for a novel sequel. Instead of extending the story further into the future, it is contemporaneous with the action in my first novel, “Patriots”. But it is set in different locales, with mostly different characters. There are just a few crossover characters, such as Ian and Blanca Doyle (whom you will remember from “Patriots” as the husband and wife Laron Light Experimental airplane owners living near Luke Air Force Base.)

The novel is being published by Atria Books, a division of Simon & Schuster. It will first be released in hardback, followed in 2012 by a trade paperback. (The latter is the same binding format used with “Patriots”.)

I should mention that the Kindle e-book and the audio book (via Amazon and Audible.com) are scheduled for the same release day. And I’m pleased to report that the award-winning Dick Hill is again doing the narration.

Again, please wait until October 4th to order your copy. By concentrating all of the orders on the release day (the “Book Bomb Day”), I hope to help propel the book into Amazon’s Top 20. Thanks!