Queen Elizabeth II died, but King Dollar is the strongest in decades. Gold doesn’t like it.

To say that gold has been struggling this year is an understatement. As the chart below shows, the price of the yellow metal declined from above $2,000 to below $1,700 (as of September 20). That slide occurred during the highest inflation since the great stagflation of the 1970s. 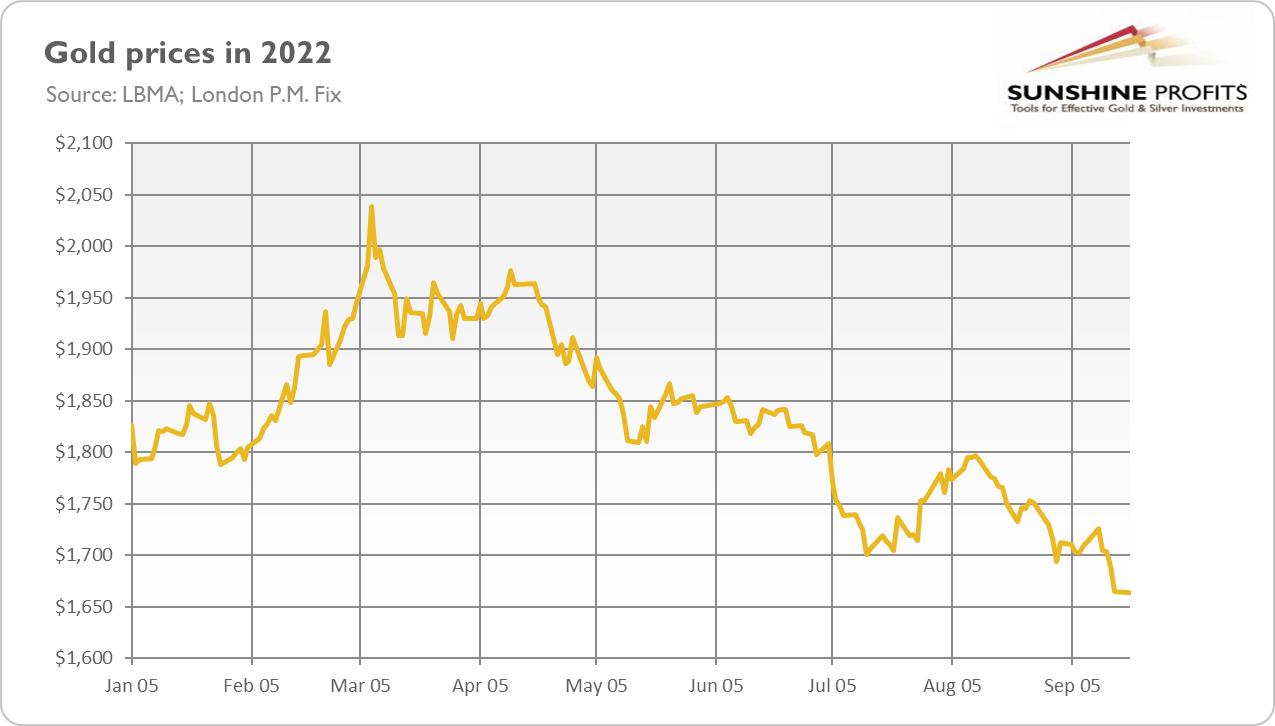 One of the headwinds blowing strongly in the gold market has been the strong greenback. As the chart below shows, the American currency has been appreciating since mid-2021. The broad U.S. dollar index rose from 110.5 in June 2021 to 124 right now, or more than 12%. 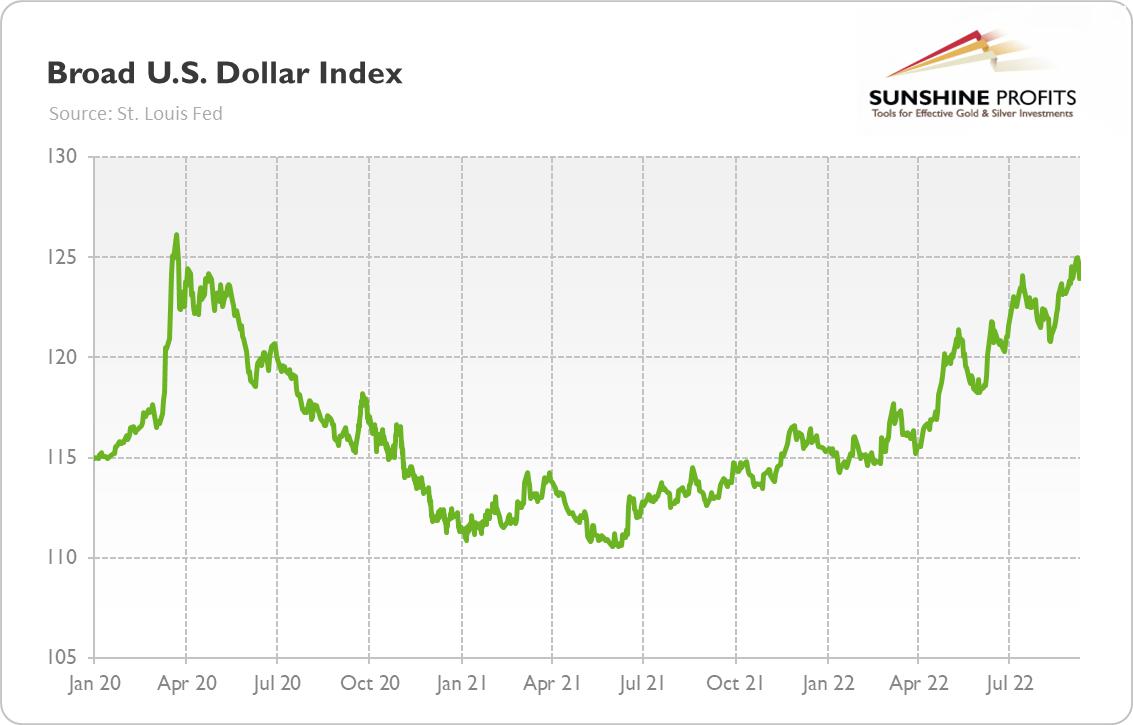 Wait, wait a second. The dollar strengthened during a period of high inflation (see the chart below) in which money is losing purchasing power. How could the currency gain and lose value at the same time? It doesn’t seem to make any sense. 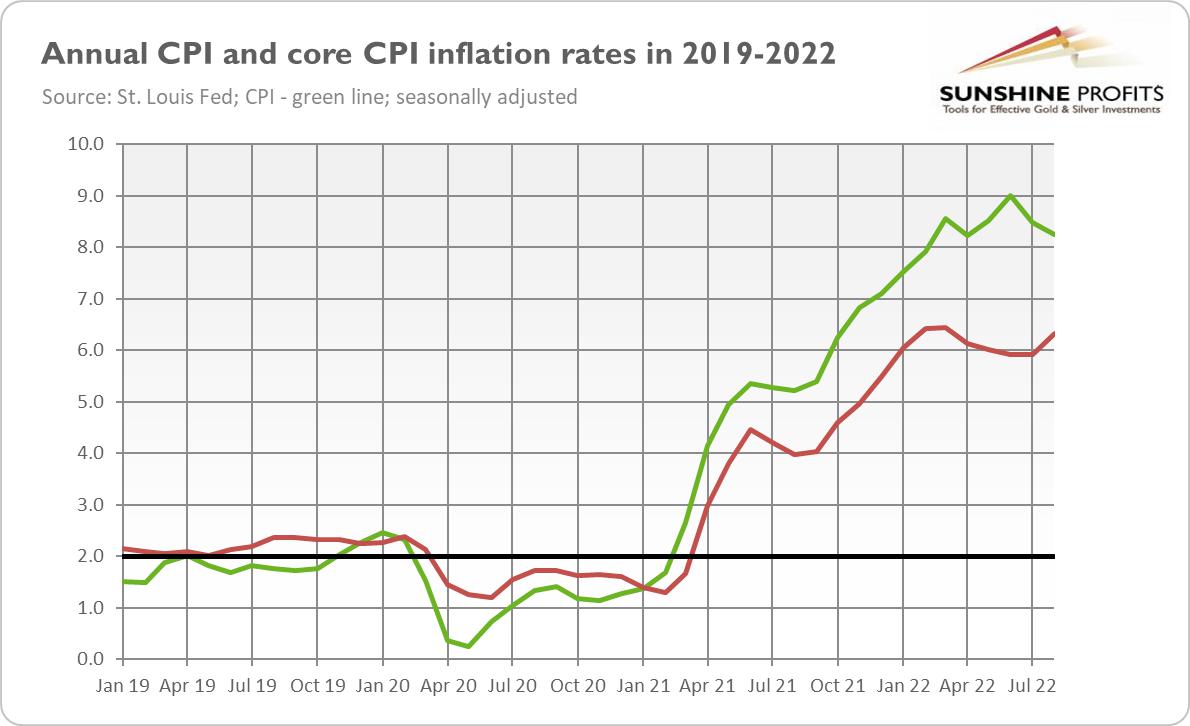 Nevertheless, it does. Because of inflation, the dollar is losing its internal purchasing power, i.e., how many real goods and services can we buy with these green pieces of paper? However, the exchange rate is about external purchasing power, i.e., how many pieces of paper with different symbols and signatures issued by foreign central banks we can buy. The answer is: more! As the chart below shows, the dollar is now near its highest levels in decades versus the British pound, the euro, and Japanese yen (please note that, for consistency, the chart paints the exchange rates as the dollar’s value in foreign currencies). 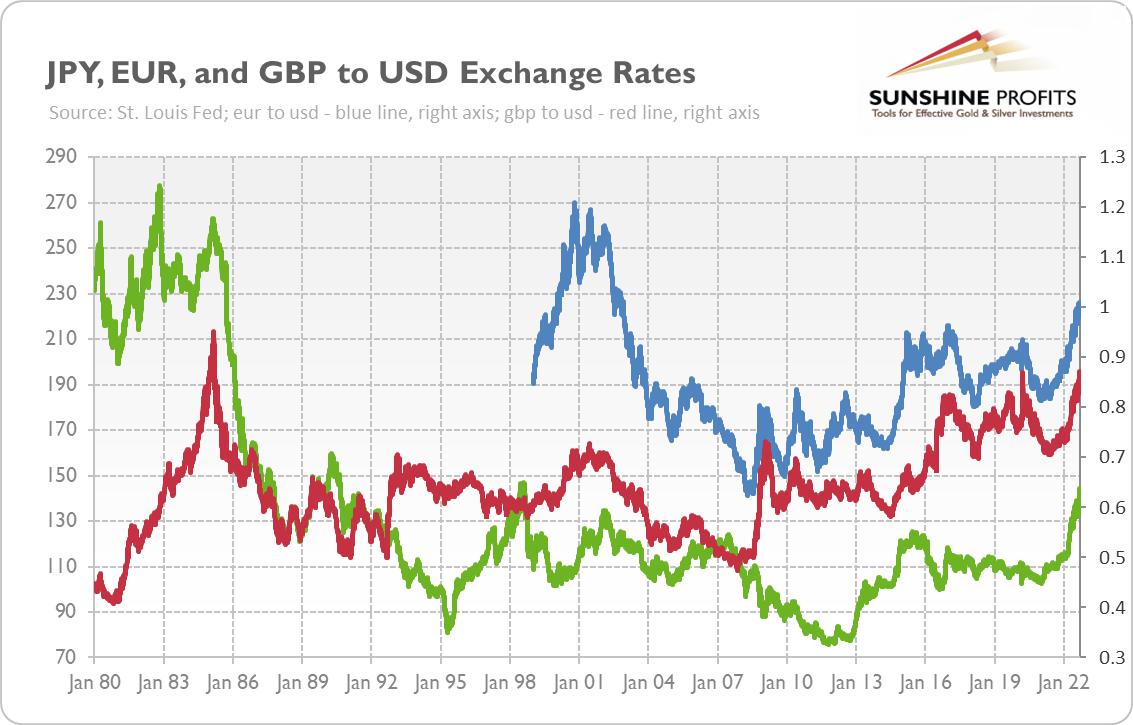 However, it doesn’t necessarily reflect the dollar’s greatness but the fact that other currencies have been even worse. As investors’ saying goes, the dollar is “the least-ugly mug in a beauty contest”. You see, the Fed was terribly delayed with its combat against inflation, but compared to other major central banks, such as the ECB and the Bank of Japan, it’s an uber-hawk that quickly stood up for a fight. Remember that exchange rates are all about relative values. For example, inflation in the euro area surpassed 5% in December 2021 and by now it has increased to about 9%, but the central bank didn’t lift its interest rates until July 2022.

The faster and more decisive Fed’s reaction increased the divergence in monetary policies and interest rates (see the chart below) between the dollar and the euro, which strengthened the value of the former. The mechanism was simple: higher rates in America attracted money from all over the world, and as investors have been buying dollar-denominated assets, the value of the greenback has increased. 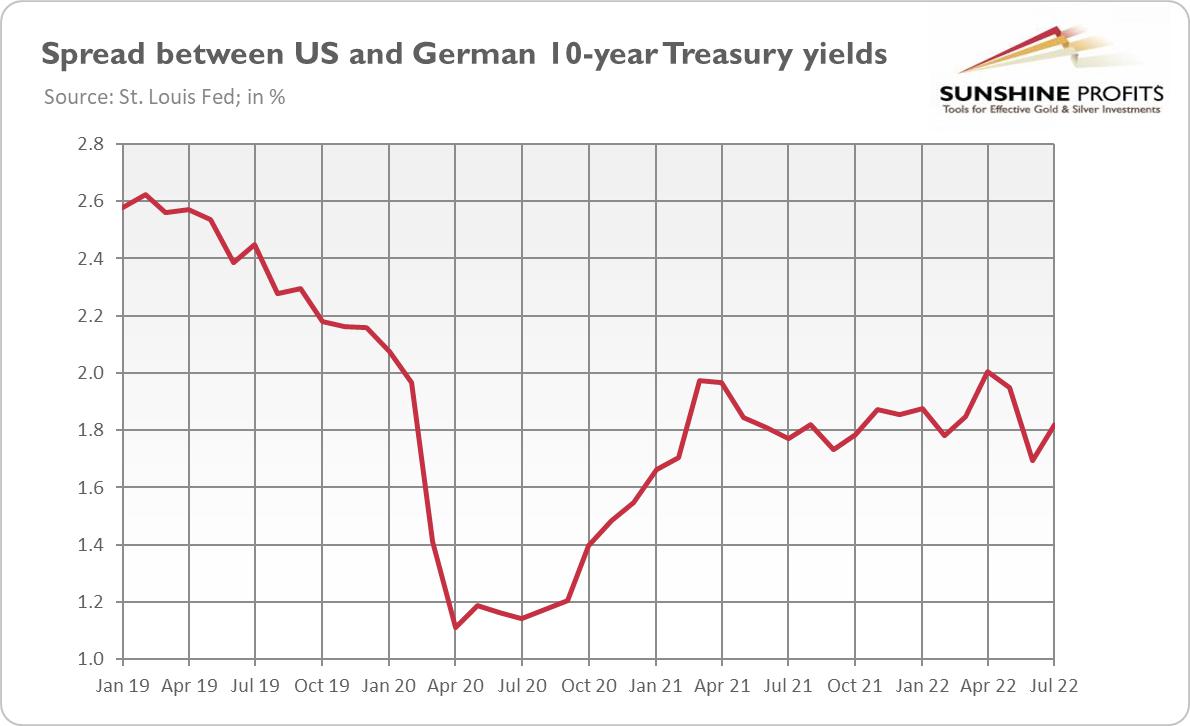 So far, so good. Now, the question is, what does a strong dollar imply for the global economy? Problems! Why? Well, maybe because about 30% of all S&P 500 companies’ revenues are earned abroad, a stronger dollar reduces the dollar’s value of these sales. Or maybe because many governments and companies have international debts denominated in dollars?

Hence, the stronger the dollar, the higher the debt to be repaid. According to the IMF, 60% of low-income countries are in or at high risk of government debt distress. Tighter financial conditions in the U.S. and a stronger dollar could only increase the pressure on countries with foreign debts. The dollar is America’s currency, but the emerging market’s troubles. Egypt, Pakistan, and Sri Lanka have already asked the IMF for help – and others may follow suit.

Please also note that about half of international trade is invoiced in dollars, which means that importers are facing higher costs not only because of inflation and supply-chain disruptions but also because of the stronger dollar.

What does the strong dollar mean for the gold market? It goes without saying that the recent appreciation of the greenback has weighed on gold prices. If not for the strong dollar, gold would have fared much better. Indeed, this year, the yellow metal lost about 6% of its value when measured in the U.S. dollar, but it gained 6.2% in euros and 9.3% in British pounds. Thus, maybe gold’s performance hasn’t been disappointing, but simply the greenback has been shining, and maybe gold is an inflation hedge, after all (but in other currencies than the US dollar)! 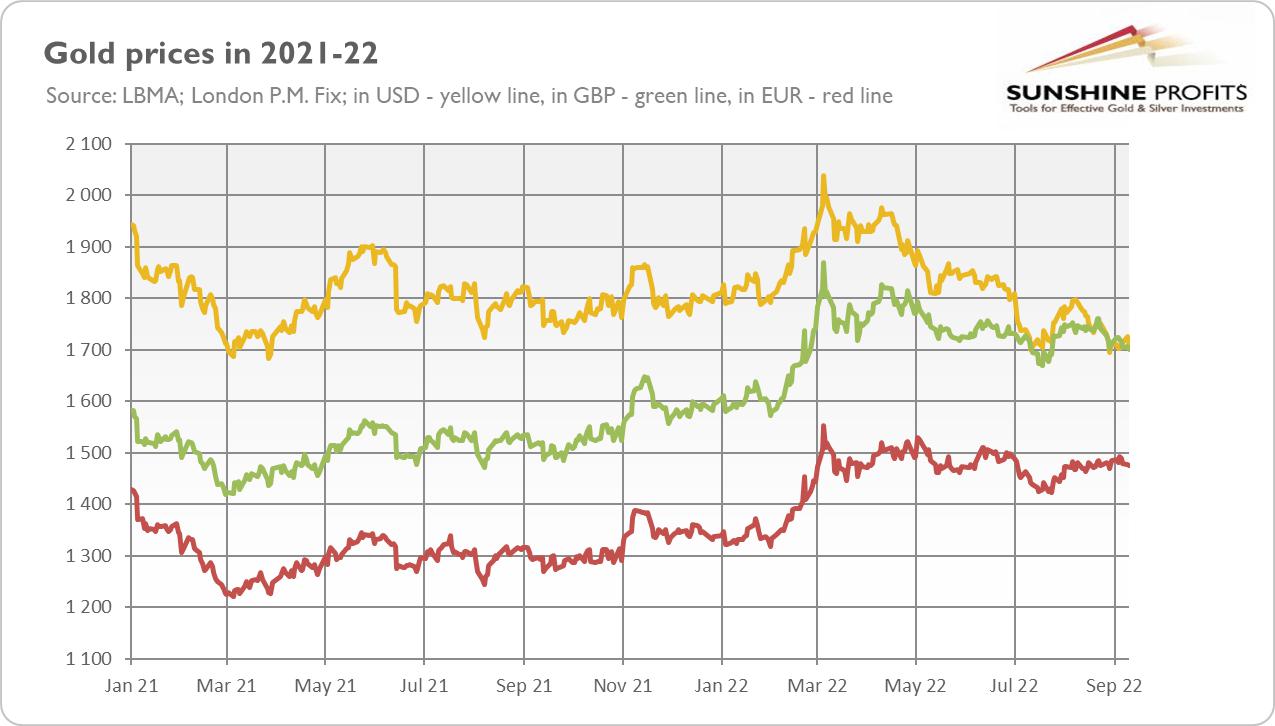 It gives hope that when the dollar weakens (for example, due to the start of the recession and the Fed’s pivot, or due to the end of the war in Ukraine), gold will start rallying eventually. It seems that the greatest part of the upward move in the greenback is already behind us.

The strong dollar could also trigger some economic turbulence, which could benefit the yellow metal. However, I wouldn’t bet that financial crises in emerging markets will induce a safe-haven demand for gold. Precious metals investors don’t care too much about other countries than the U.S. or Western Europe.

There is a true silver lining for gold bulls: one reason behind the appreciation of the dollar. The Fed’s tightening cycle is only one driver, but another is safe-haven inflows. Investors have been moving to the U.S. dollar not because it is so strong, but because of economic turmoil and recessionary risk. If so, gold could at some point (perhaps when the Fed pivots and adopts a dovish policy again) start to move in tandem with the greenback.