Recently, my daughter had a baby. It was a little girl, our first granddaughter. My wife and I made the pilgrimage across state lines to see this great wonder. The big brothers were not neglected during our visit. My wife took along the “Grandma Basket” filled with clothes and toys and treats for the boys to help them join in the celebration.

Among the toys in the Grandma Basket was a bag of several balloons equipped with LED lights. These particular balloons were labeled as “PartyGlow” balloons, marketed by Unique Industries, Inc. of Philadelphia, Pennsylvania. My wife purchased this gift for a buck at the local dollar store. Similar balloons are marketed under other brand names by other importers at Party City and a host of other vendors.

During the course of our week-long visit, two of the three balloons burst. I salvaged the LEDs from the balloons and examined them. Each was powered by two LR41 batteries. Each LR41 provides about 1.5 volts, so I knew that these bulbs operated effectively at around 3 volts. I wondered if they could tolerate running at 4.5 volts. If so, they might be suitable replacements for the Xenon bulb in my Pelican 2620 HeadsUp Lite.

I have previously tried to modify the Pelican 2620 HeadsUp Lite. I wrote about those experiments in an article that was published on SurvivalBlog on December 5, 2020. To summarize, I was looking for a red LED to replace the Xenon bulb that comes standard in the 2620. A red LED would allow me to use the light to see what is at my feet while allowing my eyes to adjust to ambient light to sense things farther away. At the same time, it would drain the battery less than the Xenon bulb it was replacing. The red LED configurations that I tested for the December article were not fully satisfactory. The LEDs in the balloons seemed brighter than the bulbs I had tried previously. I wondered if the balloon LEDs might be a more suitable replacement.

The LEDs in the balloons came in three colors: red, green, and blue. It was the red LED that I was particularly interested in for the reasons I mentioned above. Perversely, it was the green and blue balloons that burst, but not the red one. I manfully resisted the urge to sabotage my grandson’s red balloon, and contented myself with taking the salvaged green and blue bulbs with me when I returned home. 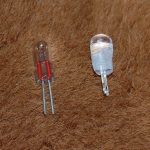 I repeated the disassembly process with the blue LED bulb. After straightening the leads of the blue LED bulb, I cut them longer than I had cut the leads on the green LED bulb. This would accommodate the greater displacement caused by not fitting within the housing surrounding the Xenon bulb socket. I got the polarity wrong on my first attempt to seat the blue LED bulb, but after rotating it 180 degrees it lighted up brightly. I then tested how well the bulb was seated by shaking the headlamp vigorously. The bulb remained securely in place.

Next, I took a walk in the dark to test the effectiveness of the light. It worked surprisingly well for a single LED. I could clearly see the area in front of my feet.

My wife stayed with my daughter and her family for a few more days after I returned home. I asked her to salvage the parts if the red balloon burst while she was still there. I waited with baited breath to hear the outcome. The balloon outlasted her visit.

Since it looked like that particular balloon was not going to sacrifice itself for my convenience, I went to the dollar store to buy another set of balloons. They were out of stock.

In a later conversation with my daughter and son-in-law, I found out the red balloon had finally burst, and the parts had been thrown away.

One of the items I found in the drawer was a black nylon case with a broken zipper. The case contained a knife (a Swiss Army knock off), a small multi-tool, a tape measure, and a tiny LED flashlight. I threw the case away. After testing the knife and the multi-tool and finding them wanting, I put them in my “problem knife” bag for later attention. I put the tape measure in the donate bag, and threw away the flashlight. The button batteries in the flashlight were burned out, and I did not think the light was worth the cost of replacing the batteries.

A few minutes after throwing the flashlight away, I had a thought, pulled the flashlight out of the trash, and removed the bulb with a pair of pliers. The leads looked about the right size to fit in the Xenon socket of the 2620. Since the flashlight was designed for three button batteries, the voltage of the bulb should be right for the 2620. I decided to see if the bulb would fit.

The base of the bulb was larger than the base of the Xenon bulb, so it would not fit within the housing that surrounded the socket, and the leads were too short to accommodate the additional displacement. As I examined the base of the bulb, it appeared that the larger size was due solely to a plastic rim around the base of the bulb. I decided to try filing away the rim in order to make the bulb fit. I grabbed the pliers from my wife’s “Mom’s Tools” set hanging on the wall, and used it to hold the bulb steady while I filed around the base with the file on my Leatherman Wave. After several minutes of careful filing, the bulb fit perfectly, and lighted nicely. I was disappointed, however, to discover that the light the bulb emitted was blue. I was expecting white, and hoping for red.

With those thoughts in mind, I took one of the red LEDs and used the knife blade on my Leatherman Wave to cut away the heat-shrink tubing that covered the resistor. I then used the wire cutter on the Wave to trim the leads of the bulb just above the resistor.

I decided the next step would be a little easier with some tools from the workshop in the basement, so I went downstairs and grabbed a pair of vise-grip pliers and a file. I gently clamped the end of the red LED bulb into the vise-grip pliers, and then gradually filed down the base of the bulb. After several minutes of work, the bulb was the right size, and I inserted it into the 2620. It fit well, and lighted nicely.

Now I needed to see whether the amount of light produced by the bulb was actually useful under field conditions. I decided to use the red light for several days as I walked the dog, stoked the wood boiler, cleared snow, and attended to other tasks outside in the dark.

The red LED was not quite as bright as I could wish, but it was close. I was happy with the outcome of this experiment. There is still room for improvement, so I plan to continue to tinker with the 2620 if further opportunities present themselves.

LED bulbs are now widely used in many quasi-disposable products. If you are alert to the opportunities, you may be able to salvage LED bulbs from items that are being thrown away, and use them to replace incandescent bulbs in older, battery-powered items like flashlights or headlamps. You could, of course, just buy new flashlights or headlamps. But if you have the time to invest, then the skills you acquire while tinkering with salvaged items may come in handy if things continue to go south.