Taurus Firearms has been around since 1941, when it began producing near clones of some of the Smith & Wesson revolvers. Since then, Taurus has produced near clones of other makes of firearms, as well as some models of their own design. Today, some Taurus firearms are being produced in the USA, and that’s a good thing if you ask me. Early on, the quality of Taurus firearms was really lacking, they didn’t hold up very well with a lot of use. Still, for the money, they were a decent gun. Today, that has changed for the most part, as Taurus is producing all kinds of firearms, and their quality is much improved. My only complaint is that their 1911 line of handguns has uneven quality control. To wit, they are either outstanding handguns, with many custom features, or they aren’t done up as well as they should be, with sloppy thumb safeties, or horrible trigger pulls, to a poorly fitted slide, just to name a few. When you find a Taurus 1911 that that was made right, you’ll know it, and snap it up.

Over the years, I’ve owned more than a few of the Taurus Model 85 revolvers and most were really nice guns — a great concealed carry piece. Several years ago, I did have a problem with just one brand-new, out-of-the-box Model 85. I checked out the gun at a local gun shop, and bought it. However, when I inspected it at the store, I only checked the hammer and pulled the trigger in single-action mode – I didn’t test the double-action trigger pull, until I was out at the range. I found that it was impossible to pull the trigger in double-action — it just didn’t work! I sent the gun back to Taurus, as they have a lifetime warranty on their guns, and it was returned about two weeks later. Seems like, some guns slipped through – a machining operation was missed, and you couldn’t pull the trigger in double-action – in single-action, yes – but not in double action. That just shows that someone who was doing the final inspection on some of these guns wasn’t doing their job, or they would have caught that the double-action trigger pull problem. It happens. I’m not saying it only happens to Taurus, but many gun makers lave some guns slip by final inspection that have problems.

Truth is, Taurus gives you a lot of gun for your money. If you are on a tight budget, and looking for something for self-defense or home defense, then take a close look at a Taurus, they have a pretty extensive line-up of revolvers and semi-auto pistols, and I’m sure you can find one that will fit your budget and needs.

The little steel frame Taurus Model 85 is a snub-nosed revolver that holds 5 rounds. It can handle the hottest .38 Special and .38 Special+P loads you care to fire through it. I would hesitate to constantly run +P loads through the gun. if you want to target practice do so with standard velocity .38 Special loads, and reserve the hotter +P load for self-defense. Sure, at the end of your shooting session, go ahead and fire some +P loads, and then load them up in the Model 85 for self-defense. However, the just 21-ounce Model 85 – steel-framed revolver will sure let you know you are touching off a hot round. So you may not like the +P loads and stick to standard velocity loads – there are a lot of very good standard velocity loads that will suffice for self-defense.

As stated, this is a small, concealed carry revolver that only holds 5-rounds, so it would be a great idea to at least carry one 5-round speed loader, if not two, on your person, when you are out and about. The double-action trigger pull, is really quite nice, breaking at 11-pounds on my sample, and the single-action trigger pull is dead-on at 4-pounds – outstanding. My sample has a black oxide finish on it – almost looks like a dark Parkerized finish. 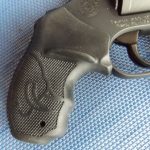 There are small, but adequate rubber combat grips on the sample. The sights – front and rear are fixed and milled into the slide, so no adjustments are possible. However, my sample shot center of mass at 15-yards, and that’s a fair distance as far as accuracy is concerned, when firing 158-grain bullet weight ammo. Full-sized pistols and revolvers, with fixed sights are usually “zeroed” at the factory for a certain bullet weight – and when it comes to .38 Special revolvers, that’s at 25-yards, but snubby revolvers are best zeroed in at 15-yards. Not that there will be a lot of difference between those two ranges when it comes to bullet drop.

This revolver has a storage safety that is mounted in the trigger…Taurus provides a key, and you insert it into this lock and turn it – and the gun is not capable of firing, until you unlock the trigger. There is also a passive safety that prevents the gun from firing if it is dropped – the trigger has to be pulled all the way until it releases for this safety to disengage.

For a lot of years, the only loads to be had for .38 Special and .357 Mag revolvers were round nose lead, 158-grain bullets. Those were not good rounds for self-defense. However, when Jacketed Hollow Point (JHP) loads came along, it changed the face of ammo – even though some of the earlier JHP loads didn’t expand all the time, they were still better than round nose lead bullets for self-defense. Today, through scientific advances in bullets, we have a great selection of JHP and other bullets that will expand and are a much better stopper than the old round nose lead and earlier JHP loads, and other early designs.

I don’t recall ever carrying a Model 85 as my one and only self-defense revolver. On the other hand, I’ve carried a S&W snubby revolver, medium sized frame or small frame, a Colt Detective Special, and even the Charter Arms .38 Special snubby as well as their larger .44 Special revolver,. But I don’t think I ever just carried a Taurus as my one and only self-defense revolver for some reason.

For my testing, I had three sweet loads in .38 Special from Black Hills Ammunition and a mixed bag of various types and brands of ammo that the owner of my gun shop gave me. As a rule, I don’t fool around much with ammo of an unknown source – some of this ammo was brand-new and some were reloads – not a good idea to fire unknown reloaded ammo through your guns – however, because I in part test firearms for a living I will occassionally run some unknown ammo through a gun. In this case, it was 39-rounds of unknown ammo – and it all worked fine. However, it wasn’t used in my testing per se – just used for function testing, and some of this ammo was really hotly-loaded.

From Black Hills, I had their 125-grain JHP load, and this is stout ammo, not meant for target practice…I also had their 148-grain Match HBWC load and this one was a light load, and then their HoneyBadger 100-grain all-copper load – not hollow point, but a load that doesn’t need to expand to get the job done – my favorite load in just about any revolver or pistol I carry.

My shooting was done from 15-yards, over a rolled-up sleeping bag, over the hood of my pick-up truck, and all shooting for accuracy was done in the single-action mode. The 148-gr Match HBWC was the overall winner in the little Model 85, if I was on my game, I could get three-inch groups – but not all the time. Next up with the 125-gr JHP +P load, and this was stout, and the best groups I could get were right there at 4-inches – dead one. Last up was the 100-gr +P all-copper HoneyBadger load, and I got groups just under 4-inches. Remember, this is a 2-inch BBl revolver, so I’d say this is quite good in the accuracy department…odds are good, that you won’t be shooting at someone from 15-yards away or further.

I did take some shots of opportunity out to 75 yards, and the bullets – all of them – were dropping and hitting the ground before they had a chance to reach the targets.  Still, with some practice, I was getting closer and closer to some targets on fallen trees – not too bad – with more ammo and practice, I’m sure I could have nailed a man-sized target. In all my testing, I fired 250 rounds of ammo – not counting the mixed bag of 39 rounds that was given to me.

I’m impressed with the little Taurus Model 85, it’s a fine little self-defense revolver. However, there seems to be some bad news. I’ve heard that Taurus, has discontinued this model for some reason – too bad, it’s a great little self-defense revolver. However, the good news is that you can still find the Model 85 all over the country – in used or new condition – so don’t fret too much, you can find one if you want one.

My sample was purchased brand-new from my local FFL dealer, and I got it so inexpensively that I won’t even mention my cost. You could do a lot worse, if you’re in the market for a nice little revolver, either for concealed carry or for self-defense at home. The little Taurus will take good care of you, with the right ammo, and practice.

Regular readers will know that some time ago, I tested the Taurus Model 85 with a polymer frame, it was a great little gun. My only real complaint was that one didn’t fit most holsters that would normally fit a steel-framed 85.