Iconic, is defined by the Merriam-Webster dictionary as: “…relating to, or having the characteristics of an icon…widely recognized and well-established an iconic brand name…widely known and acknowledged especially for distinctive excellence…” This pretty much describes the Buck Knives Model 110 folding hunting knife. Today, we’re taking a look at Buck’s newest addition, and this is a 110 that opens automatically, instead of manually.

I wish I had a Dollar for every time I heard someone say “hey, that’s a Buck…” whenever they saw someone using a folding knife, with brass bolsters and a wooden handle scale. While it might have “looked” like a Buck, it was just a copy, an imitation, or rip-off – call it what you want, but it wasn’t a genuine Buck. Right now, sitting on my computer desk, is a three knife set, made by Remington, the gun maker – okay, not made by them, but made for them, in China, and it has the Remington name on it. The largest knife in the set looks very similar to the Buck 110 folder – but upon closer examination, you can see it isn’t anywhere near the quality of workmanship of Buck.

Buck Knives has been in business more than a hundred years, and that’s a good long time, for any sort of business to be around. That says a lot about the company. If they didn’t turn out quality products, then they wouldn’t still be in business. Some years ago, Buck, wisely made the move from Kalifornia to Idaho – good on them.

Back in 1963, Al Buck, designed the original 110 folder, and it has been a huge hit with hunters and outdoorsman alike. Many hunters wanted a folding knife to take afield, instead of a fixed blade knife. However, they demanded that any folder be the best it could be. If you’ve ever dressed out big game, like a deer, you know how tough their hide can be to penetrate – well, the Buck 110 was and is up to the task.

First, There Were Conversions

For quite a few years, and even now, there are some fellows out there, who convert a manual opening Buck 110 folder, into an automatic. Some of them do a decent job, some are really bad at it. However, with Buck making their 110 folder into an auto, that takes all the business away from those guys.

Let’s take a quick look at the 110 folder, needless to say, it has a push button that you press, to open the 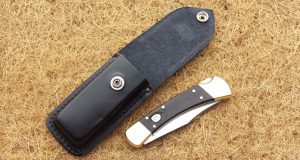 blade – it is a one hand opening folder. It also has the heavy clip point blade, that hunters demand, and the blade is 3 ¾-inches long, and made out of 420HC – high carbon steel. This is a Buck standard. However, some years ago, Buck changed the edge geometry on the blade, so it would be easier to re-sharpen. In the past, this steel, at the Rockwell hardness Buck was using, was extremely difficult to re-sharpen. Many users would just send the knife back to Buck, for them to re-sharpen. But you don’t have to do that today, you can easily re-sharpen the blade, with a little practice. 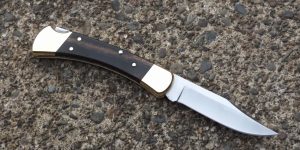 As already mentioned, the bolsters are made out of highly polished brass, but they “stain” easily with use – they easily pick-up your finger and handprints, but it is easily wiped off. The handle material is a natural ebony hardwood. This wood is sourced from the Congo basin in Africa, and it is re-planted in this same area. This particular wood is called Crelicam Ebony and it is very attractive. Keep in mind though, that this is a natural wood material – not man made – so each knife handle is a bit distinctive. It may or may not have tiny imperfections. This is natural, so don’t think you received a factory second–you did not.

Each 110 comes in a friction-fitted leather sheath, from the factory. The belt loop on the back of the sheath is large enough to fit most belts, other than military spec web belts. To be sure, the Buck 110 was highly prized during the Vietnam war and other conflicts since then.

The original 110 has no thumb studs for one handed opening, however, the 110 automatic has a neat little 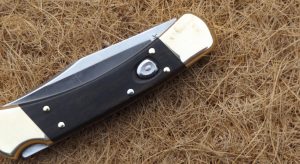 button on the handle scale, and with a simply push of that button, the blade opens – and it opens with authority, as well as extremely smoothly – very nice job on this aspect. The 110 is a lock-back design, and the lock is in the rear of the knife – and it locks the blade open solidly – in either the manual or the automatic versions.  To be sure, there is no pocket clip on the 110 – you can carry it in your pocket, of the sheath, I’d do the sheath for a more secure carry. I don’t see myself having to draw any folding knife, in a knife fight.

My sample came, as expected, hair-shaving sharp out of the box, and I mean it was S-H-A-R-P!!! The button release is easy to access, and I don’t think this folder would accidentally open if you carried it in your pocket.  But be advised: carry it in the provided sheath. When the blade is opened, and locked in place, you have to press on the lock in order to fold the blade back into the handle. The spring is more than a little stout, so it takes some effort. What surprised me is that, even though the spring is stout, the blade opens smoothly.

Testing was the usual around our small homestead, cutting down blackberry vines, opening packages and even used in the kitchen – the super-sharp blade made all cutting chores a piece of cake. I never once had to re-sharpen the blade after several weeks of use. Nice!

If you’re in the market for the newest Buck 110 folder, and you can legally own an automatic folding knife in your locale, then check this folder out. Be advised though, since this knife was introduced at the SHOT Show, it has been in great demand. I had to wait a good while before I could get a sample for this article. And, to be sure, this folder is made in the USA!

They’re Selling at a Premium

Full-retail is $200 – however I checked around the ‘net and found that they are selling for much more than that, due to the scarcity of this automatic. Keep checking back with Buck on their web site, or your favorite cutlery shop – maybe you’ll luck out and snag one.

Its just hard to not like anything Buck Knives makes, and this latest 110 may just be the best improvement that they have come up with.