Have you heard? There’s a lot of speculation lately that we might see downright apocalyptic events in mid-to-late September. I have to admit; it’s an impressive list of events, prophecies, and trends, and I’ve been encouraging my family and friends to top off their preparations in anticipation of what might happen. My “threat level” assessment is high.

However, this is also an opportunity to revisit this whole idea of “projecting” trends and “forecasting” events, so that we are not tripped up or misled by the limitations of that process. Rather, we should focus on what truly is important, especially if we think something dramatic really is about to happen. Let’s take a look. 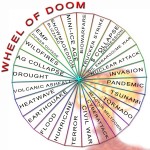 Disasters are, by very definition, events that catastrophically impact one or more of the four basic categories of provision– security, shelter, water, and food. We are highly motivated to predict them. Depending on the event, it could be critical to have an hour’s notice, a day’s notice, or a year’s heads-up that something very bad is about to happen.

Regardless, no matter how much we study and analyze, our ability to actually “foresee” the future is pretty much zero. We can’t see even one second into the future, much less one week or one year. I’ve been prepping for 15+ years, and in those years I have seen many very disturbing predictions come and go, most of them based on patterns of events, or convergences of events, or trends, or political threats and warnings.

NONE of those things came to pass, thank God! (So, I’ve had many more years to be prepared for the huge crises that I’m p-r-e-t-t-y sure are coming, I just don’t know when.) Well, what went wrong?

Why aren’t we more successful in predicting disasters or crises in the U.S.? How is it that “Black Swans” (the term popularized by Nassim Taleb in his book and articles) keep catching us by surprise?

A trend may look influential, but for it to affect our country is a huge undertaking.

2. The Law of Unforeseen Consequences

The Law of Unforeseen Consequences is produced by factors such as:

The limitations of humanity include the following:

4. Our Incomplete Understanding of Physical Processes

Our incomplete understanding, especially about the initial conditions and physical processes of weather, tectonics, volcanism, ecosystem dynamics, solar processes, human mass psychology, economics and more, prevent us from having the ability to forecast future behavior. Yes, even after all these years, science doesn’t know everything. What disasters/crises do we think are impossible? Are they really impossible? (“All things are possible until they are proved impossible – and even the impossible may only be so, as of now.” – Pearl S. Buck)

5. The Unseen Hand of Satan and Those Participating in His Conspiratorial Multi-generational Plotting

I’m sorry, but there really is an evil plan to destroy the world. The plan encompasses diverse persons and organizations, many of whom are completely unaware they are being co-opted in a demonic conspiracy, unaware of the invisible connections coordinating their actions.

6. The Unseen Hand of Our Sovereign God

Our sovereign God will have the last say and always gets His way. Remember that. Few are the prepper novels, disaster movies, and survival reality shows that ever include or anticipate that God has a plan for our individual lives and the course of human history. I call it the “God Factor”; it’s an idea we espoused during our college Risk board game marathons that referred to the unpredictable, uncontrollable, unstoppable intervention of the only living, sovereign, almighty Creator God of the Bible.

Evil people will make their little plans with grandiose expectations for world government, a world economy, and the suppression of human freedom. They can plan all they want, but God gets the last word. (We should never fear the machinations of the world, no matter how dark the day.) This is vital to remember.

So, sure, we try hard to get a glimpse of what’s coming, but it seems we can only recognize “precursor events” in retrospect. (Hindsight is 20/20.) To our frustration, mankind gets blindsided again and again.

These “precursor” events and apparently significant “convergences” are happening all the time in our highly complex, mobile, and violent world. Coincidences happen. What they mean is the big question. After many years of seeing coincidences and convergences come and go, some of them quite dramatic, I can say they clearly don’t always imply disaster is imminent!

However, instead of accurately foretelling a disaster’s character and timing, we’ve been able to do something nearly as useful! By playing out the scenarios for the myriad different disasters, we have come to an encouraging and useful conclusion: the preparations for one scenario have a lot of overlap with the preparations for other disasters. Being prepared for the factors that overlap gives us a good foundation for virtually any foreseeable event. This is the basic premise behind prepping.

The Basic Premise Behind Prepping

Prepping is simply a practical, wise response to the uncertainties and contingencies of life. We can imagine which scenarios are possible or even likely (i.e., the “Wheel of Doom”). Also, we can accumulate supplies and knowledge to cover those. We are prepping based on extrapolations of our current knowledge, trends, historical record, and our knowledge of basic human needs. Unless we receive a divine heads up, we’re not going to know about an impending Black Swan, but we can use the general principles of prepping to be reasonably prepared.

Short of having an angel with a flaming sword suddenly appear at the foot of our bed and deliver a prophetic message from God (and there may actually be some authentic divine warnings relevant to this very September that I mentioned), we have huge limitations on knowing what’s going to happen next.

Read on about the disaster and what we can do in Part 2.