The good ol’ fashioned revolver is not dead, not by a long shot. However, the majority of requests I still get from readers are for articles on semi-auto pistols. My local gun shop has just one display case that is devoted to revolvers – everything else is semi-auto handguns. I recently ran into one great deal on a little known revolver, from Rock Island Armory, and its called the M200. We’ll take a close look at it, in this review.

I honestly never thought I’d reach the age where folks would start calling me an “old timer” – at least when it comes to firearms. Every now and then, the guys at my local gun shop, will show me an older model revolver, and comment that “you old-timers must have carried one of these back in the day…” Well, they aren’t too far off – my mind tells me I’m 27, my body tells me I’m way beyond my mid-60s though. Ugh!

I cut my teeth on revolvers back in the 1960s through 1970s – and somewhat into the early 1980s, when I was doing private security work, private investigations or in law enforcement. There wasn’t a whole lot of choices in reliable ammo for semi-autos back then – a majority of guys who carried semi-auto handguns, were stoking them with FMJ, and that’s the not best ammo for self-defense purposes. As ammo development advanced, so did people carrying semi-auto handguns for self-defense, or other lawful purposes.  I personally didn’t have any problem carrying a 1911 .45 ACP with FMJ ammo – it had been proven to be a very good manstopper over the years in combat. However, many 1911s and other semi-auto handguns just wouldn’t reliably feed JHP or SP ammo back then. Reliability has to be a number one concern with any handgun. 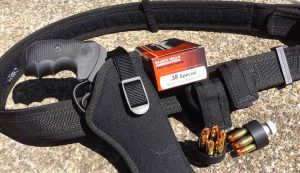 Back in the day, you either carried a S&W or a Colt revolver, if you wanted the best of the best. Oh, I experimented over the years, with other brands of revolvers, like the Charter Arms, especially in .44 Special. The only bad thing was, the commercial .44 Special ammo available was usually round nose lead – not the best for self-defense. I also liked and carried their little snubby in .38 Special – a larger selection of self-defense ammo was available back then. Most of my carry back then, was usually with a S&W or Colt revolver.

I spent some time in Rhodesia – now Zimbabwe — and I took both a 6-inch barrel Colt Python in .357 Mag and a Colt Combat Commander .45 ACP in satin nickel finish with me, and I alternated carrying the two when out in the Bush. I still remember, the head of security at the airport in Rhodesia, offering me twice what I paid for my Python. Back then, a new Colt Python would set you back about $350 – he offered me $700 USD…I wouldn’t sell it. Today, you will easily pay $2,000+ for a Colt Python.

Today we are focusing on the Rock Island Armory (RIA) M200 revolver. This is not the prettiest handgun I’ve ever owned, nor is it the ugliest. My local gun shop had this revolver in their display case, it was “used” but unfired – full-retail on this gun is only $220 – so the “ugly” part of this deal didn’t bother me…the shop had $190 on the price tag – that’s what caught my eye. Long story short, I got the gun for $160 out the door, with a box of unknown reloaded ammo that the shop threw in with the gun. Not a bad day gun shopping, at all. 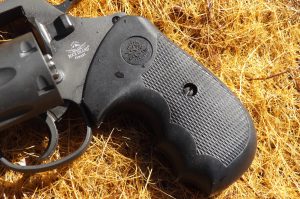 The M200 is 8.78-inches long, 1.50-inches wide and is 5.43-inches high. As already mentioned, it is a typical SA/DA revolver, It has fixed sights – so no adjustments can be done – the sights were zeroed for 25-yards. The gun weighs in a 1.76-lbs unloaded, and it has “Combat Polymer” grips, that are rounded – the frame is a round butt. I don’t care for the feel of the grips, but there are no after-market grips available that I’m aware of – I would prefer some nice square butt rubber or wooden grips, but I’m not complaining too much – the gun was a super-steal of a deal. The finish is a dark gray, almost black parkerized method – it will stand up to some weather and abuse, that’s for sure.

The cylinder release is similar to a Colt – in that, you have to pull back on the release to open the cylinder, not push it, like you’d do on a S&W. There is no lock-up on the front of the cylinder – again, like a Colt, I much prefer the S&W when it comes to this – just makes the cylinder lock-up tighter. The head space on the gun was tight, very tight – that’s a good thing. There was a little bit of play when the cylinder is locked-up – not much, just a touch – but the timing was just fine. 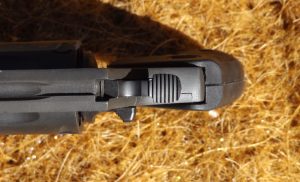 After I fully inspected the M200, and lubed it, I headed out to the range with the 50 rounds of unknown reloads, the gun worked perfectly. It wasn’t until I started shooting single action, that I noticed the hammer is long and wide – not a bad thing, but I hadn’t noticed this when I bought the gun – not a deal breaker, by any means.

It wasn’t until a week later, I got back out to the outdoor area where I shoot, for some serious shooting. I had “killed” all the rocks in my first outing, so it was time for some serious accuracy work. I had the new Black Hills Ammunition .38 Special Honey Badger 100-grain ammo on-hand for this part of my testing. This ammo is rated as +P and Rock Island Armory says you can fire +P ammo in this revolver. Still, I would limit the amount of +P shooting – to start with +P is hotter and more powerful. Secondly, it is more expensive to shoot. Who wants to punch paper and kill rocks with spendy ammo? Not me!

Seeing as how the gun’s sights were regulated for 25-yards, I set my target out at the distance. The all-black sights were hard to see, so I added a touch of hot pink nail polish to the front sight. I already had the bottle in my gun box. This made all the difference in the world to my aging eyes.

I shot 6-shot groups, rather than the traditional 5-shot groups that I normally shot with a semi-auto handgun. This just seemed easier and smarter to do it this way. My accuracy testing was done via single-action, and I was getting groups slightly larger than 3-inches – outstanding for an inexpensive handgun…if I hunkered down, I was getting groups right at 3-inches – the gun showed a lot of promise! Double-action shooting wasn’t nearly as good – even though the trigger pull was outstanding. I don’t blame the gun or the ammo, it was me – I don’t do a lot of revolver shooting, and my groups were over 4-inches – I know the gun/ammo is capable of better than that – with more practice, I’m sure I could tighten-up those groups. Then again, I was shooting 6-shot groups instead of 5 shot groups.

I had an old generic ballistic Nylon holster, that fit the M200 perfectly, I put it on a Nylon gun belt, and added in two HKS speed loaders on the belt, in a double speed loader case – perfect fit. This set-up may just end up in my e-box in my truck – a person could do a lot worse out on the trail, for a hike or for self-defense than this set-up. Check out the RIA M200 at your local gun shop. They also make a snubby version, if that is your preference. It’s a lot of gun for the money!