What storm? The stock and bond markets in the US are doing great, the media has sold the strong employment story, and all those nasty wars are far, far away.

So the top few percent are doing well and are sheltered from the storm, but what about the rest of us? What storms are pounding us?

What will central bankers and politicians do? Extend and pretend, print currencies, create far more debt, and fabricate stories about how everything is good.

Look at the US national debt for the past 40 years. The exponential trend is clear – up 9% per year on average and about 10% per year since the 2008 recession/depression. It will rise until Congress drastically cuts spending (just kidding) or some nasty reset occurs. Exponential increases do not last forever so our current exponential increases in debt, stock prices, welfare, military expenses, and economic stupidity will end someday. 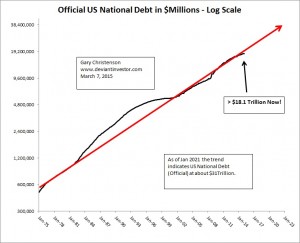 Gold and silver are real money, while dollars, euros, and yen are paper substitutes that circulate as currency in place of money. Look at the graph of the ratio of silver to the national debt for the past 20 years. Note the long term rise in the ratio and especially the increase since 9-11. Yes, there has been huge volatility in silver prices as shown by the ratio, but silver and gold – real money – are demonstrating their true value in the face of escalating debt. 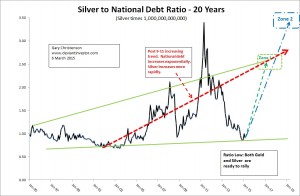 Debt will increase and silver prices will rise more rapidly. Since silver and gold have been crushed during the past four years while stocks and bonds have rallied to new highs, expect those trends to reverse this year. When stocks and bonds decline central banks will accelerate their creation of currencies to reflate them and debt will increase even more rapidly, along with silver and gold prices.

Suppose (more of the same – no hyperinflation):

Originally posted by Gary Christenson at The Deviant Investor