The topic of this essay might seem a bit tangential to normal SurvivalBlog topics, but as I will explain, it falls into the category of “emerging threats.”

Men have always sought to dominate and forcefully order the lives of others. This is part of human nature. It dates back to before the days of Noah. Early empires sought power and wealth, by conquest. Monarchies and feudalism dominated the Middle Ages in Europe, South Asia, and East Asia. Then, in a consolidation of monarchist power, colonialism was rampant from the 1550s to the 1950s. Only a few large and economically strong colonies broke away from their parent countries, before 1900.

As colonialism began to wane, collectivism started to re-shape the world, mostly after 1916. Ponder the far-reaching effects of these brutal collectivists: the Soviet Union (1917-1991), Nazi Germany (1933-1945), Cambodia (1967-1978), Cuba (1959 to present), and Communist China (1943 to present). In all, these and other dictatorial regimes killed more than 133 million people in the 20th Century [1], imprisoned hundreds of millions, and placed billions of people under the yoke of contrived collective economic systems, confiscating their wealth and land.

Most of this killing and suffering was at the hands of communists or socialists with grand utopian visions of the future (with special status just for themselves) or a “new world order”. To their way of thinking, this justified taking the lives and property of their countrymen, and often also those in other countries, through invasions.The latest in a long string of socialist despots is coming to the fore. This time it is with the new excuses of “protecting the environment” and preventing or reversing “climate change”. Many of them use the blanket term  “Environmental, Social, and Governance” (ESG) to encapsulate their plans. In effect, they want to control every aspect of human life, all around the world, to fulfill their supranational socialistic goals. These are globalists. As a key enabling tool, they want to implement a global electronic currency, with every transaction tracked. In toto, they have is a bigger plan of action than that of the multi-national Marxist-Leninist communist conspiracy of the 20th century. Most of the 20th Century communists wanted to keep nation-states intact. But the 21st Century globalists want a true world government, with all state and national governments subsumed for “the greater good.” The level of collectivism and redistribution of wealth that they covet is much larger than their Marxist, Leninist, and Maoist predecessors ever attempted. These new “green” socialist schemers want The Whole Enchilada: a reset to global government, with themselves at the top.

The current-day plotters are led by Klaus Schwab, and his World Economic Forum (WEF). The organization’s Board members include Al Gore, Christine Lagarde, Laurence Fink (Chairman of Black Rock), Kristalina Georgieva (Managing Director of the IMF), and David M. Rubenstein (Co-Founder of The Carlyle Group.) Their corporate partners [2] are legion. Bill Gates of Microsoft is one of their featured speakers. The WEF is methodically orchestrating what they call The Great Reset [3]. Their schemes are so grandiose that they go so far as to brag that by 2030, “…you’ll own nothing, and you’ll be happy.” The WEF openly touts their subversion of corporations, governments, banking, royal houses, the mass media, academia, large churches, and “young global leaders.” It is noteworthy that some of the WEF’s “Young Global Leader” (YGL) alumni include Emmanuel Macron [4] of France, Jacinda Arden [5] of New Zealand, and Greta Thunberg of Sweden. Additionally, Justin Trudeau of Canada is a WEF “Agenda Author.” Quite the team!

We can see by the way that they operate, that the WEF is pushing as hard and fast as they can to “transform the global village.” As publicly stated, the goals of the WEF [6] are fairly vague, and “flexible.” But I’m confident that they have very detailed concrete lists of what they plan in each country, and their timelines for each. One of their key goals is reducing the world’s population by more than half — all to make things more “sustainable”. The WEF’s senior technology strategist is Yuval Harari. He thinks the world is overburdened with “useless” people [7].

Upon formalizing a host-state agreement with Switzerland in 2015, the WEF became “The InternationalOrganization for Public-Private Cooperation”. But even as far back in 2003, the Swiss Army and police have provided security for WEF conferences, at Swiss taxpayer expense. (The Swiss police now provide the inner perimeter, while the Swiss Army provides the outer perimeter, complete with fighter jets and air defense missiles! [8])

As I’ve written before: beware, whenever you hear the phrase “public-private partnership.” Almost without exception, these are people up to no good, and at the very minimum, your wallet is at risk.

Who is Klaus Schwab? 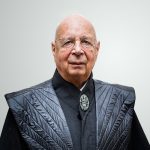 [9]Klaus Martin Schwab (pictured at left, dressed like a Klingon) is the executive chairman of the World Economic Forum, which he founded in 1971. Schwab was born in Ravensburg, Germany on March 30, 1938. Klaus Schwab’s father, Eugen Schwab, was the managing director of a German subsidiary of the Zurich-based engineering firm, Escher Wyss. [10] Christian by upbringing, Schwab is an agnostic who has surrounded himself by a power-hungry crowd that includes Jesuit-schooled Catholics, Muslims, Jews, Hindus, and Atheists. I have read that the Schwab family has both Christian and Jewish roots. But apparently, their real religion is the quest for their own elevation to total power and global control. The annual WEF conference at Davos, Switzerland attracts an inordinate number of billionaires [11] from around the globe.

Some conspiracy theorists falsely label the WEF as a Jewish-led cabal. Granted, they do conduct a Davos Shabbat dinner each year [12] — but their goals are godless. They recruit their membership from among many religions, but the majority are in fact agnostics and atheists. The man with the money who is backing the WEF’s programs — and most likely the man behind the curtain — is none other than multibillionaire George Soros [13]. Soros is a non-practicing Jew, but again, the WEF is not a Jewish group.

I use the term Neo-Feudalism to describe the new order envisioned by Klaus Schwab and the WEF.  The term Neo-Feudalism is not some sort of hyperbole. They want nothing less than to create a two-tier society, with a small tech elite at the top and a landless serf peasantry serving them. Their dream looks a lot like the society depicted in Fritz Lang’s 1927 silent science fiction film, Metropolis [14]. In between the elite and the proletariat, there will be a heavy-handed state security apparatus, led by ruthless and power-hungry professional soldiers, police, and intelligence agents. But these enforcers will never be brought into the elite caste. Any of them who grow too ambitious will get the Beria betrayal treatment [15], and be replaced.

I believe that the feudal order of the Middle Ages provides a good parallel to the currently-lauded Liberal World Order [16]. The WEF’s most compelling core intent is indeed to create a new form of feudalism. Instead of kings and barons at the top, the WEF would analogously install their own tech elite, for “global governance”. Coincidentally, take note that the WEF’s Young Global Leader (YGL) roster includes a lot of Middle-Eastern Muslim princes [17]. They are, of course, famous for hedging their bets.

What is Their Next Move?

We can see the way that the ongoing global COVID-19 pandemic was manipulated from the start.  The globalist plotters and their minions brought world trade almost to a halt, destroying economies at the macro level, and destroying individual small businesses and individual livelihoods. They’ve doled our countless billions in “stimulus”, thus creating dependency and secondarily contributing to the destruction of national currencies, via mass inflation.

When viewing national and world affairs, always ask: Who benefits? (Cui Bono?) During the pandemic, multinational corporations stayed open for business via the Internet, and grew larger. People cocooned at home, watched movies on Netflix, and ordered everything via Amazon.com. But meanwhile, millions of small “Mom & Pop” businesses that dealt face-to-face with customers were forcibly shuttered and ruined, during the protracted lockdowns. The WEF and other globalist groups have clearly established a modus operandi for their brand of “transformative change”.  They surely now have a whole series of pandemics or other crises planned.

As I mentioned before, globalists desire a global cryptocurrency.   Unlike the current crop of private cryptocurrencies that have opaque transactions, the new sovereign crypto(s) will have 100% transparent transactions. With this transparency, all transactions can be taxed and traced.  And anyone who doesn’t toe the line could have their account blocked or zeroed out.

The first step in creating a global digital currency is via the establishment of central bank digital currencies (CBDCs). Those should be in place in the next 18 months. Following that, there will likely be a large crop of national-level sovereign cryptos. Simultaneously, private cryptos will be seen as competitors and legislated out of existence, and cash will be gradually outlawed. But the end game is for that one worldwide cryptocurrency unit, to replace all of the others. Whoever controls that digital currency will be well-positioned to rule the world.

What Will Slow or Stop Them?

All of the preceding probably has many readers now asking: How can we slow them down, or stop them? In my estimation, the best way to do so is to encourage small, constitutionally-limited governments with a spirit of individual liberty in the framework of national sovereignty. We must also foster:

To insulate yourself and your family from the effects of The Great Reset, and to help counter it, I recommend that you take these steps:

With the world changing so rapidly with pandemics and the overt manipulations of the WEF and other “transformative” globalist pressure groups, it can feel overwhelming. But don’t be discouraged. With God’s help, we’ll prevail! – JWR