Today I’m posting a guest meme that was created several years ago, by my friend Commander Zero of the great and long-running blog, Notes From The Bunker [1]: 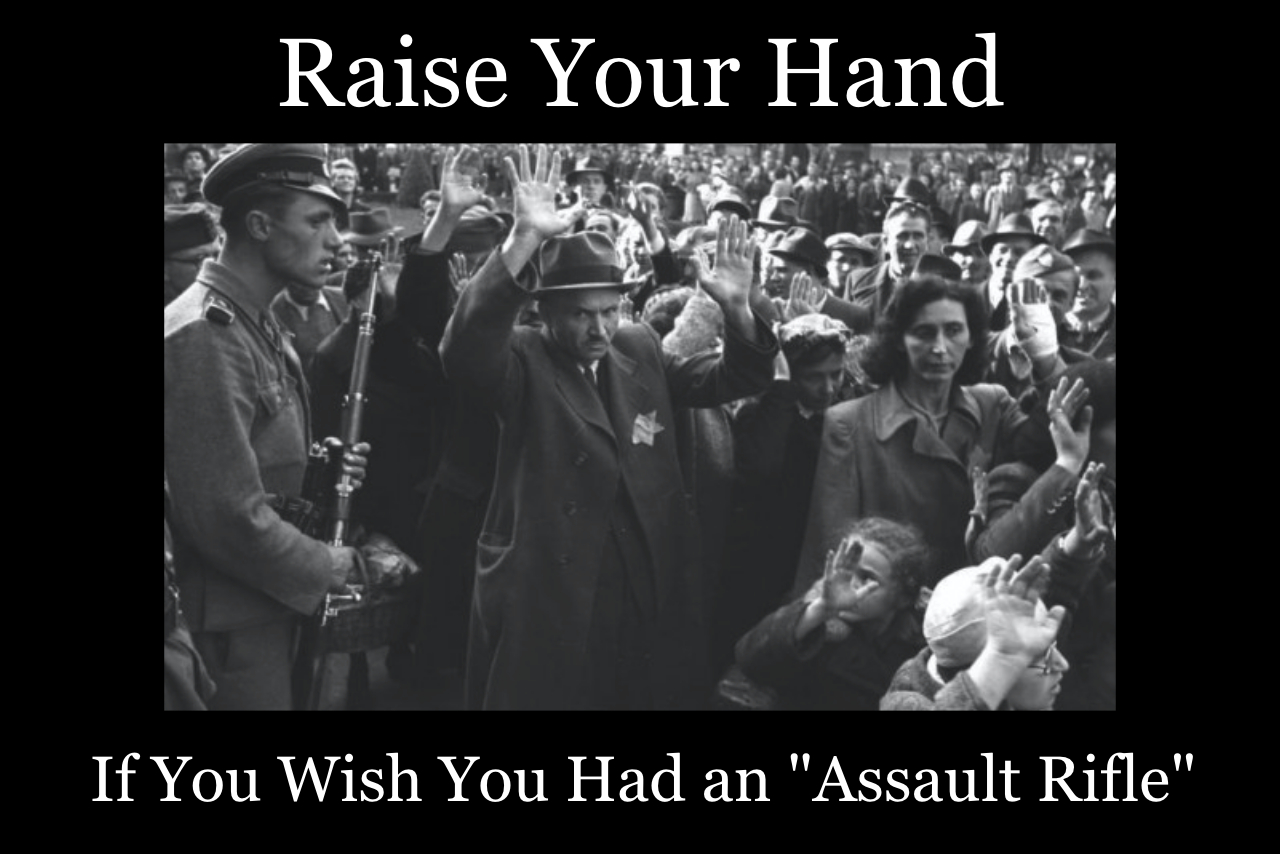 Raise Your Hand  — If You Wish You Had an ‘Assault Rifle”

Commander Zero says that you are welcome to share it. But please credit him (with a link to his Notes From The Bunker  [1]blog), when you do.

Link for sharing this meme:  https://kapwi.ng/c/qZvLiu3z [2]

Comments Disabled To "JWR’s Meme Of The Week:"

Two songs come to mind that are very appropriate regarding how this election has been stolen and how we should respond:

“I Won’t Back Down” byTom Petty

“We’re Not Gonna Take It” by Twisted Sister

Considering what is happening in this country. Where is our “LIBERTY LIFEBOAT”.

Where is our “LAND OF PROMISE”. Now would be a good time to have a frank discussion from those frequenting Survival Blog. Who else to start the conversation, but founder and senior editor of Survival Blog. Not all of us have found our safe place. A discussion of options around the country would be most helpful at this time.

Respectfully submitted for your consideration.

Came across this vid yesterday — so worthwhile to watch. Says a lot of what we must be prepared to do… [3]

Ron – excellent video! I wish everyone in the US would watch this. Everything he said is so powerful and sadly, so very true.

Continuing in prayer for everyone in this community and for our Nation.

Ron and Lisa In TX, I completely agree with you. Like, Lex Green, the video made me cry. Krissy

Lisa – more thorough reply coming, but till I get there, consider what Christ faced … he KNEW what was coming and yet offered more than mere words.
Ron

This meme is ver-y timely, as yesterday I was pondering how to avoid the inevitable gun confiscation. Maybe it won’t happen under the Biden administration, but it will happen if the country continues to elect progressives. Anyway, yesterday I re-read a post on Survivalblog from 2018 by Rector regarding gun confiscation. It is very informative, and I highly recommend it. While he does recommend burying caches on property you don’t own, away from your residence, I don’t see this as an option for me. I also can’t bury anything on my property. As firearms can be disassembled to varying degrees, does anyone have insight into hiding disassembled, dispersed firearm parts in a home, so they fit in and are not easily identified as firearms by whatever technology the powers that be might utilize? Any suggestions? I am sure there will be a lot of boating accidents between know and Inaguration Day, but Rector says in his post that that won’t cut it when they come pounding on your door. He also believes few of us will actually go down with guns blazing. Any ideas will be appreciated.

He’s right…It’s now or never, but to do what? Does a 2 million person march in Washington do any good. The perpetrators (Democrat governors of those states) couldn’t care less. Democrat leadership couldn’t care less. The Supreme Court either can’t or won’t do much that I can see. Other than waterboarding those governors to get them to admit that they lied, cheated, and stole the election in their states, there is not much recourse. What is the best course of action for patriots? For me that is the big question.The only thing that comes to mind, is my thinking of what MacArthur said upon returning to the Philippines to oust the Japanese: Rise up! Rise up and strike!

When debating anti-gun advocates, I always point out that no Jew or any other member of a group last thought prior to being executed by the state apparatus would think: “Thank goodness for gun control! If I had a gun right now, I might hurt someone!”

so you red the thought of any person that was executed in history and what is with the thought of people who were murdered not by state but by private criminals?

The Indians were outnumbered, and being a primitive culture, could not adopt firearms fast enough to make a difference. The Jews in 1930’s Germany complied with the laws to turn in their guns, leaving them helpless before the assaults by the Brown shirts. If the Jews had owned guns and stood up to the bullies, instead of being humiliated forced to get on their knees to scrub cobblestones, and so on, perhaps the Brown shirts would have suffered a set back. The Jews in the Warsaw Ghetto finally understood that the Nazis would never let any of them live, regardless how much they obeyed, so they rose up and fought. In short, the Indians did fight, but they were out-numbered and did not have the weapons to sustain a fight. But the Jews and the Armenians, if they had private arms, would have at least made their oppressors pause, and count the cost of trying to eliminate them.

No the SS wouldn´t´ve stopped(they weren´t necessarily very good but they were fanatic) and i don´t see how the Jews in Germany ´d any advantage over the indians, quite contrary the US Army wouldn´t´ve such an advantage in Organisation, Training and supply.

I think that you are missing the point: A war of resistance is not always fought to win. Sometimes they are fought out of sheer desperation. Just limiting the numbers of compatriots being rounded up and gassed or shot is a small victory.

Sorry, part oft my point was that personal weapons alone most likely wouldn’t’d made a difference for the victims.
Because they lacked Organisation, Supply and so on.

With other words a organised force isn’t stopped by a bunch oft people who owns guns.

But a organised group oft people who stand together can do that without guns.
Generalstreiks.

When the topic of firearms comes up in a conversation with liberals, I sometimes ask them what Turkey, Cambodia, Germany, China, the old Soviet Union have in common. Answer: they all disarmed their citizens prior to initiating a genocide upon them. People can’t understand this fact primarily because they know so little about history. Very sad, and very dangerous. Having grown up as a minority Christian kid in a very Jewish neighborhood of Chicago, it has always mystified my how many Jewish friends and acquaintances are adamantly opposed to firearm ownership. Makes no sense.

Did the ownership of weapons for the american indians stop the US Genocide on them?

A thought, perhaps they knew the fire arm rights would help them little against an organised force, but would increase the risk of progroms from hate groups.

Their firearm rights didn´t stop the persecution of the mormons

The window of opportunity for purchasers is rapidly closing. Yesterday there was an hour’s wait to get into the Palmetto State Armory retail store. Friday the local Walmart had 2 rifles and less than a dozen boxes of rifle cartridges — mostly .350 Legend. No .22s. No shotguns. There was some birdshot left, but no buckshot or slugs. The little gun shop down the road has a few rifles, shotguns and handguns. They are running low on ammo as well. No 9mms, .38s, or .380s. Buy what you can when you can. Come January you will probably wish you had. OTOH, if you have more guns and/or ammo than you can reasonably use, the coming months will be a great time to thin the herd.

We may now have no excuse ! President Trump is planning on having rallies in several states ( guess which ones ! ) and if that is truly the case, then we haver no excuse for saying ” what can we do “. I am sure many of us live with driving distance to support him. Crowd size can make a difference and willingness to pay a price as well. Christ KNEW what was coming His way and yet he offered more than mere words – he was willing to give it His all. If the only courage we have is to support him until the legal decisions have run their course, then we must make the drive, voice our opinion and be willing to perhaps get a few rotten eggs thrown our way,

Glenn Beck [5] offers some alternate websites for ” better than average ” truthful information, as does Andrew Wommack’s truth and liberty site
[6] under resources category.

Last, I admire Jim and Avalanche Lily for their non compromising stand on both ” preparedness and ” Scriptural matters. Avalanche is the right moniker – we must become an avalanche for the ” right ” side of things and bring light into the darkness of the swamp.
Rant over….